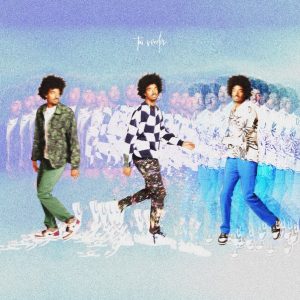 March 25, 2022 – Today, chart-topping breakout artist Tai Verdes released his newest single “3 outfits” – LISTEN HERE. The catchy bop is the latest song to be released from his forthcoming sophomore album HDTV due out later this year. Tai took to socials back in January to start teasing the track, which immediately went viral, amassing millions of views across TikTok videos. The release comes alongside a cinematic video, directed by Dylan McGale, that brings the song’s cheeky lyrics to life, as Tai gets caught up in a headline-making romance – WATCH HERE.

“My next album is about analyzing my own experience with love in a vulnerable way,” said Tai. “The song ‘3 outfits’ was really the most transparent way to express how I was feeling throughout different times in my relationship. This song is my reflection of that, building to the grander theme of the album which is about the good and the bad parts of connecting with someone.”

The release of “3 outfits” adds to an already unstoppable year for the hitmaker, who was nominated for the Social Star Award at the iHeartRadio Music Awards on Tuesday. Tai can next be seen on his forthcoming 2022 HDTV Tour, which kicks off on Monday, March 28th at George’s Majestic Lounge in Fayetteville, AR. Produced by Live Nation, the 22-city tour will be making stops in Atlanta, Philadelphia, New York, Chicago and more before wrapping up in Los Angeles at The Belasco on Sunday, May 22nd. renforshort will join as special guest on all dates. Tickets are on sale now on TaiVerdes.com. Tai recently took the stage at last week’s Lollapalooza Argentina and Lollapalooza Chile to deliver two epic performances in front of massive crowds of people – watch HERE. Additionally, Tai can be seen across the music festival circuit in 2022, with performances at Bottlerock Festival, Bonnaroo Music & Arts Festival, Reading Festival, and Leeds Festival, among others. For more information on Tai’s upcoming tour dates, please visit: TaiVerdes.com.

ABOUT TAI VERDES:
Three months into the COVID-19 pandemic, Tai Verdes was an essential worker with a 9-to-5 job at a Los Angeles Verizon Wireless store. Now with his debut album TV, he has a #3 Billboard Heatseekers album and #5 Spotify debut album, as well as one of the biggest viral hits in the US, “Stuck In The Middle,” hailed by The New York Times as one of the “Best Songs of 2020.”
After posting a series of TikTok videos, Tai’s breakout single “Stuck In The Middle” took flight hitting #1 on Spotify’s US viral chart and has since amassed more than 120 million streams and over 3.5 million TikTok creations, being viewed over 3 billion times since the song’s release in late May 2020.
Tai’s follow-up single “A-O-K” followed a similar path, having amassed more than 300 million streams, 1.3 million TikTok creations, and earning him #1 on Billboard’s Emerging Artist Chart. The song climbed the charts, landing at #12 at Top 40 Pop Radio, and #34 on theBillboard Hot 100. Tai has performed on Jimmy Kimmel Live! and The TODAY Show, as well as Lollapalooza 2021 to a crowd of 35,000 people, which was his first-ever live set. The pop rising sensation has garnered praise from Rolling Stone, Billboard, MTV, NYLON, Genius, Complex, VMAN, Lyrical Lemonade, Variety, Stereogum, and more.