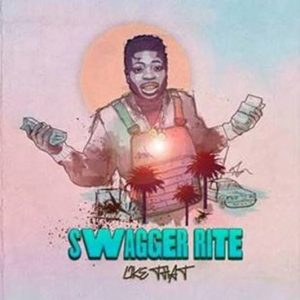 Friday July 17th, 2020 – Toronto, ON – Today, Sony Music Entertainment Canada Inc. artist Swagger Rite releases his official new track for 2020, “Like That”. Following his powerful and emotional track “Sticky” released on June 26th, Swagger gets back to work delivering a new track showcasing a departure from his previous singles.

Produced by Allan Edwards (Lil Wayne, Rotimi, Kevin Gates), Hollywood P and Andy Crae, and engineered by Stretch and Rodzilla (second verse) “Like That” shows Swagger Rite taking a new direction. Displaying his lyricism over a downtempo beat that is more melodic than the high-energy trap production we are accustomed to, Swagger shows his deftness, skill and agility.

Lyrically, “Like That” sees Swagger switching lanes with his lyrical cadence. Veering from his trademark authoritative presence to a more indifferent and nonchalant approach, Swagger still maintains the braggadocio demeanor to which we have grown familiar. “Like That” is calling out people that consistently put out negative energy, show hate, and focus on other people’s lives instead of working on their own craft.

Swagger Rite shares, “I always want the best for people. I can’t help how they feel about me though. At the end of the day you can get it, how you get it, and be successful. This dream comes with a lot of hard work. It comes from passion!”

Swagger Rite, always on the move, found himself in the studio when planting the seed for “Like That.”

“I was vibing in the studio one day when the hook came to me… just ‘Like That’J. I had to make this a smash! I always got a lot on my mind. When you live the life that I live there will always be people who want what I have…but they can’t get it how I get it because I am blessed!” states the ever confident Swagger Rite. “There is so much money out there. It doesn’t make sense why you would want mine. You gotta get yours…I gotta get mine…shoot, we could get money together but for now… I’m getting mine ‘Like That’.”

After ending a successful 2019 with the release of his debut EP The Swagged Out Pedestrian (November 19th, 2019) featuring trap bangers “Drop Top” feat. Yella Beezy & Flipp Dinero, “In Love with the K” featuring Blockboy JB, and “Hottest Out,” Swagger Rite has set the stage for bigger things to come. With “Like That” he gives the listener a taste!