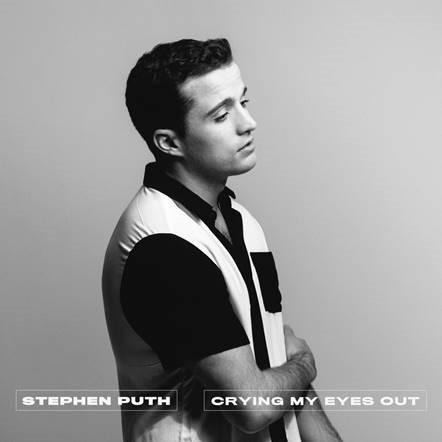 “Stephen is making a big name for himself in the music world.”
— POPSUGAR

(November 22, 2019 – New York, NY) — Today, Los Angeles-based singer, songwriter, and musician Stephen Puth releases his latest single, “Crying My Eyes Out” with Arista Records. The new track follows the success of Stephen’s previous release, “Look Away” which was written and co-produced with brother and fellow musician, Charlie Puth. Stephen made his television debut last month where he performed “Look Away” on ABC’s LIVE With Kelly & Ryan.

Listen to “Crying My Eyes Out” here.

This June, Stephen released his third single, “Look Away” which landed on Top 40 at U.S. radio. He spent the summer performing for cities across the country, including opening for Lizzo at a radio show in Chicago. Stephen’s debut single, “Sexual Vibe” has well over 12 million views and was featured on sought-after Spotify playlist, “Pop Rising” as well as 21+ New Music Friday’s across the globe. YouTube named Stephen a “Trending Artist on the Rise.” Stephen has been critically praised by V Magazine, Billboard and was included in Variety’s 2019 Young Hollywood Report as ‘one to watch.’

Stephen Puth knows that the most powerful, heartfelt songs in pop-music history are about love. A singer, songwriter, and musician, Puth also writes songs that traffic in affairs of the heart. Growing up, he developed his love for music by immersing himself in classic rock and becoming enamored with legends like Van Morrison, Led Zeppelin, The Beatles, Carly Simon, James Taylor, Otis Redding, and Bill Withers. Classically trained in piano and self-taught on the guitar, he went on to become a songwriter-for hire, having written songs for artists such as The Vamps, Pretty Much, Daniel Skye, Jack & Jack, and Stanaj before deciding to become an artist in his own right. Puth hopes to create music that resonates with people. “Most people’s lives consist of waking up, commuting, being at work, commuting, going to the gym, eating dinner, and falling asleep,” he says. “In between, there’s music. I hope my songs give people whatever they need to get through their day.”