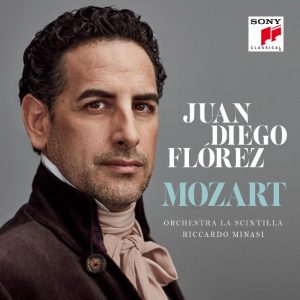 Acclaimed across the globe for the beauty of his voice, the emotional power of his performances, and his extraordinarily dazzling high notes, the Peruvian superstar tenor Juan Diego Flórez has so far in his career focussed almost exclusively on the masterpieces of the bel canto repertoire by Rossini, Donizetti and Bellini, and others. Now, in his eagerly awaited debut recording for Sony Classical, he turns his attention to a composer with whose works his talents also have an ideal relationship.’I’ve always wanted to do it, but now is the time. I finally feel I’m ready to convey the expressiveness, the simplicity, the universality – in short, the magic – of Mozart.’

Although Flórez has not yet performed a Mozart role on stage, the music of the great Austrian composer has nevertheless played an important part in his career. When he first began to turn his attention from rock and pop to opera as a young man of seventeen, he was profoundly inspired by the recordings of legendary Mozartians such as Alfredo Kraus. His decision to devote his life fully to opera was then consolidated when he appeared in the chorus of a production of Die Zauberflöte aged eighteen. ‘I was blown away. Mozart became a synonym of ‘magic’ for me, and his music helped me decide my path in life.’

From his earliest studies at the conservatoire in Lima to the present day, Flórez has studied, sung and performed Mozart’s opera arias and concert works in his recitals. But this is the first time he has chosen to record them. ‘I feel this is the right time, and in the future I’ll be adding much more Mozart to my career, and singing the great tenor roles in Die Zauberflöte, Idomeneo, La clemenza di Tito, and also Don Giovanni. I’m so excited by this new future and new adventure with Mozart.’

The album includes many of the best-loved arias from those operas. From Die Zauberflöte comes ‘Dies Bildnis ist bezaubernd schön’ in which the hero is inspired by a picture of the beautiful Pamina to fall in love with her. There are two arias from the late masterpiece La clemenza di Tito: ‘Del più sublime soglio’ in which Titus sings of his love for Servilia, and the anguished ‘Se all’impero’ which sees Titus struggle to show mercy to a man who has plotted to kill him. Both tenor arias – ‘Dalla sua pace’ and ‘Il mio tesoro’ – from Don Giovanni are present too, as is the hauntingly beautiful ‘Un’aura amorosa’ from Così fan tutte.

There are also arias from earlier operas, including the dazzlingly virtuosic ‘Si spande al sole in faccia’ from Il re pastore, and the infectious‘Fuor del mar’ from Idomeneo. From Die Entführung aus dem Serail is the lovely ‘Ich baue ganz auf deine Stärke’, full of amorous hopefulness, and from Mitridate, re di Ponto, composed when Mozart was just fourteen, is the fast and furious ‘Vado incontro’. The album also includes the substantial concert aria ‘Misero! O sogno’.

‘It’s wonderful to explore the two faces of Mozart. We see the early composer, still rooted in the baroque tradition and in the virtuosity of eighteenth-century bel canto, and we see the more mature Mozart – the one we know better – who is all about expression, and emotional charge. I feel happy and privileged to be singing these arias.’

There were certain challenges in presenting these arias, as Flórez confesses. ‘When singing Mozart, you have always to preserve a quality of lightness, almost aloofness, but you must still make sure your voice carries to the last row at the back of the theatre. In the small space of a recording studio next to a microphone it’s a challenge to convey the feeling of that ‘lightness’ – to convey the feeling of still being in a theatre.’

But the singer is adamant that the obstacles are worth the effort. ‘Mozart’s music is universal, transcendental. Somehow I think he was like an angel, or a superior being. Everybody loves his music. You don’t have to understand why you love it, but you still do. That’s his magic.’