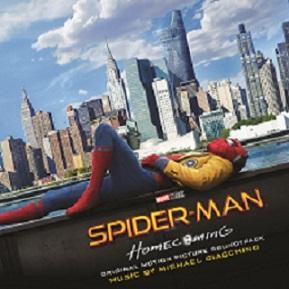 A young Peter Parker/Spider-Man (Tom Holland), who made his sensational debut in “Captain America: Civil War,” begins to navigate his newfound identity as the web-slinging super hero in SPIDER-MAN: HOMECOMING.  Thrilled by his experience with the Avengers, Peter returns home, where he lives with his Aunt May (Marisa Tomei), under the watchful eye of his new mentor Tony Stark (Robert Downey, Jr.). Peter tries to fall back into his normal daily routine – distracted by thoughts of proving himself to be more than just your friendly neighborhood Spider-Man – but when the Vulture (Michael Keaton) emerges as a new villain, everything that Peter holds most important will be threatened.

Composer Michael Giacchino has credits that feature some of the most popular and acclaimed film projects in recent history, including “Inside Out,” “Jurassic World,” “The Dawn of the Planet of the Apes.” “The Incredibles,” “Ratatouille,” and “Mission Impossible: Ghost Protocol”.

Giacchino’s 2009 score for the Pixar hit “Up” earned him an Oscar®, a Golden Globe®, the BAFTA, the Broadcast Film Critics’ Choice Award and two Grammy® Awards. Giacchino began his filmmaking career at the age of 10 in his backyard in Edgewater Park, New Jersey, and eventually went on to study filmmaking at the School of Visual Arts in NYC. After college, he landed a marketing job at Disney and began studies in music composition, first at Juilliard and then at UCLA. From marketing, he became a producer in the fledgling Disney Interactive Division where he had the opportunity to write music for video games.

After moving to a producing job at the newly formed DreamWorks Interactive Division, he was asked to score the temp track for the video game adaptation of “The Lost World: Jurassic Park.” Subsequently, Steven Spielberg hired him as the composer and it became the first PlayStation game to have a live orchestral score. Giacchino continued writing for video games and became well known for his “Medal of Honor” scores.

Giacchino’s work in video games sparked the interest of J.J. Abrams, and thus began their long-standing relationship that would lead to scores for the hit television series “Alias” and “Lost,” and the feature films “Mission Impossible III,” “Star Trek,” “Super 8” and “Star Trek Into Darkness.”

Additional projects include collaborations with Disney Imagineering on music for Space Mountain, Star Tours (with John Williams) and the “Ratatouille” ride in Disneyland Paris. Giacchino also was the musical director of the 81st Annual Academy Awards®. His music can be heard in concert halls internationally with “Star Trek,” “Star Trek Into Darkness” and “Ratatouille” films being performed live-to-picture with a full orchestra.

This past year, Giacchino’s music could be heard in “Zootopia”, “Star Trek Beyond”, “Dr. Strange,” and the newly released “Rogue One” which marked the first score to be composed for a Star Wars film following John Williams. Giacchino’s projects for 2017 include “War for the Planet of the Apes”, “The Book of Henry” and “Spider-Man Homecoming”.

Giacchino serves as the Governor of the Music Branch of the Academy of Motion Picture Arts and Sciences and sits on the advisory board of “Education Through Music Los Angeles”.

The track list of SPIDER-MAN: HOMECOMING (Original Motion Picture Soundtrack) is as follows: