+ NEW SINGLE “SUMMER IN NEW YORK” OUT AT MIDNIGHT 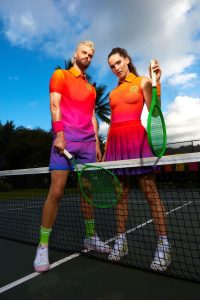 SOFI TUKKER have taken over the world with their intoxicatingly glossy mixture of striking electropop with global influences that always takes dazzling and unexpected turns, leaving the listener on the edge of their seat if not lifting them off of it. Their new album WET TENNIS, the follow up to their twice GRAMMY nominated debut, is out tonight at midnight via Ultra/Sony Music.

The album is a celebration of self-empowerment, owning your right to pleasure, and liberating yourself from outside constraints. The title itself is an acronym: When Everyone Tries to Evolve, Nothing Negative Is Safe. It’s about leaving behind lesser fears and vices in favor of pursuing joy. Whatever challenges the duo face throughout the album, it isn’t long before they return to defiant positivity; it’s a story of ecstasy undoing human error, of delight outdoing our inevitable fallibility. Written over the past three years, WET TENNIS is a testament to the duo’s durability and their commitment to their fans, The Freak Fam. When in person events became impossible, SOFI TUKKER’s livestreams were a daily ceremony. Sophie and Tucker were able to interact in real time with their community, experimenting and getting feedback on ideas that would eventually become WET TENNIS. These are songs made for their fans but perhaps more significantly, with them. Tennis features prominently into the album’s iconography. The game itself represents Soph and Tuck always hitting ideas back and forth to each other in their writing process, and the overlapping tennis rackets represent the venn diagram of their brains. They both have very different interests, but where the rackets intersect is that sweet spot that’s SOFI TUKKER.

Wetness itself is key to the album, with each track feeling akin to just having emerged from a warm pool., dripping with an irresistible sensuality. Whether the album finds them in a playful mood or profoundly earnest, it never misses a step, gliding through a slick, dewy world through which they’re the only fitting guides.

SOFI TUKKER will perform live from NYC at 11:30PM EST to celebrate the album’s release. Fans across the world can livestream the performance with Amazon Music & Twitch here.

The album’s focus single “Summer in New York” is a guided tour across SOFI TUKKER’s NYC, and marks a full circle moment for the pair as they return to live in the city after spending the past few years in West Palm Beach. Above all, it’s a dedication to their city: the birthplace of SOFI TUKKER, the home that welcomed them straight out of college, and provided inspiration for their earliest work. Sophie’s beloved Miss Favela in Brooklyn where Brazilian music and food reign, Bang Bang tattoos where Tucker gets his ink done, The Knocks’ Chrystie St studio where “Drinkee” was made, The Box, and much more. The song weaves in the hook from an NYC classic, Suzanne Vega’s  “Tom’s Diner” to connect all that is exciting about the city past and present. In a moment of collective consciousness, a cover of “Tom’s Diner” is also currently a sensation on TikTok, bringing the song to a new generation of dream chasers along with “Summer in New York.”

As the first track and most recent single “Kakee” readily displays, SOFI TUKKER exist to toy with and upend expectations. Sung entirely in Portuguese by Sophie Hawley-Weld, the song is an ode to female pleasure with a tongue-in-cheek persimmon metaphor. What could so easily have been a high tempo dance track is an ecstatic romp layered with supremely cool guitar with post-punk energy, morphing it into a stellar concoction only the duo could have created.

The “Kakee” video was filmed in Hawaii and is full of visual double entendres that correspond with the lyrics. Persimmons are squeezed until they gush and drip everywhere culminating in an ecstatic Sophie laying in a field. It was directed by Aerin Moreno with creative direction from Amber Park and styling by Johnny Wujek who were also the team on the “Original Sin” video.

“Original Sin” immediately takes another turn, opening with Tucker Halpern’s melancholy words, delivered in a nearly monotone manner so as to maximize their crippling power. He’s backed by gently strummed guitar and then by throbbing synths and bass, all before Sophie enters the fray with a retort of her own to his dismay. There’s one thing they can agree on: “So I think you’ve got somethin’ wrong with you / something’s not right with me, too.” It speaks for all of us barely concealing a mess beneath a calm facade. On another level, it’s a rejection of sin itself: none of us can be saints. Belying the existential woe of the lyricism, the song itself pulsates with life, hooking its talons in instantly and never letting go.

The “Original Sin” music video is steeped in playful eroticism and introduces the  joyful and seductive iconography of WET TENNIS. In true SOFI TUKKER fashion, they decamped to a tropical location radiating lush greens and sunlight and realized the video in Oahu, Hawaii.

“Forgive Me” finds Sophie pleading for understanding and a reclamation of someone lost, regardless of the price (“I’ll just let you yell at me all you want”). Alongside Turkish DJ Mahmut Orhan, SOFI TUKKER manage to morph an act of pure desperation into something both addictive and universal. It’s about the ultimate power, and surrender, of true forgiveness. The video was filmed on location at Evcik Beach and Kilyos Beach in Istanbul.

WATCH THE “FORGIVE ME” MUSIC VIDEO

For the title track, “WET TENNIS,” the pair ramp things up with an intro that doesn’t sound all too far removed from a parade one might hear in New Orleans (though the track was recorded in Miami with a group of Latin-American musicians), before expanding into a guitar and horn driven extravaganza, a sexy affair that will have you reaching for your partner or seeking out the nearest equally, shall we say, driven individual. Like they say: “the ball’s in your court.”

Up next is a brief Interlude, but one that allows SOFI TUKKER to display another side of their artistry, with Sophie singing placatingly over a stripped back musical backdrop, just her voice and the strumming of guitar. It’s a gentle, perfect lead-in for the aching drama of “Sun Came Up”. Backed by electronic artist John Summit, the song tells a tale of one of those chance encounters that becomes simply unforgettable. It starts with a glance at a party, then a shared joke, and somehow morphs into the kind of night that’s all too rare in this life. As Sophie sings, “You and I danced until the sun came up,” she manages to capture and bottle that very feeling.

“Larry Bird” comes in to play an entirely different game. Opting for a largely instrumental and Tropicália approach, SOFI TUKKER let the thumping bass and steel drums do the heavy lifting. It’s a tour-de-force for guest Tuck’s Dad, and a personal moment for Tucker, who grew up idolizing Bird (Sophie even appears to sing “33” in Portuguese: both Bird and Tucker’s basketball number). The basketball legend from which the song draws its title himself has quotes peppered towards the tail end of the song, drawing a connection between his game and SOFI TUKKER: “you already know who’s gonna win this thing.”

“Hold”, meanwhile, is a glancing blow, finding Sophie mired in isolation. It unfurls like a vine, ascending from its stark beginnings into a downtempo anthem, fitting for the nightclub once it’s become too smoky to make out who your friends are, lost in the maelstrom of strangers, all looking for the same thing. It’s an exercise in duality, cold and warm all at once. Guest vocalist Adam of BOII adds to the lonely atmosphere, as if he and Sophie are so close, yet just out of reach as they yearn for anything but spending the night alone.

Spiraling around yet again, true to its title, “Mon Cheri” is sung in a variety of languages, from French to Bambara, and boasts the coaxing fun that’s ever present within the potential for the romance language. Driven by lively guitar and call-and-response verses alongside legendary West African duo Amadou & Mariam, it’s perfectly suited for an imaginary stroll through some fantastical European sojourn: all before plunging into pure ecstasy in its final minute, with a frantic, dizzying beat entering the picture. It’s impossible not to emerge without a grin on your face.

“Freak” pulls in yet another direction, swerving somewhere between Breakbeat and something entirely modern, something like a Fat of the Land for 2022. It’s a celebration of the duo’s “pandemic fam”, for those who were always present for a daily dance party during the lockdown. Hardly running over 2 minutes, it’s over in the blink of an eye, but makes for another delightfully startling detour in an album chock full of them.

To close things up, SOFI TUKKER draw away yet again, emerging with something that’s quite simply serene, with the pair daring to cover “What a Wonderful World.” Here, the duo make the song entirely their own, boiling down the raw elements of SOFI TUKKER – gently plucked guitar, twinkling keys, and Sophie’s plaintive, gorgeous vocals. It’s a strangely fitting ending to what proves to be a genuine sonic adventure. After all the trekking to be found within WET TENNIS, it’s only right they see us off with a warm embrace.

With the album release, the duo has launched a new WET TENNIS merch line, which is available on their webstore along with an ombre picture disc vinyl and a very limited number of autographed CDs. The physical formats of WET TENNIS are available for pre-order.

Following transcendent headline sets at CRSSD, Ultra Music Festival, and their show at Belly Up Aspen which raised $19,560 for Red Cross Ukraine, the group embark on their WET TENNIS world tour. SOFI TUKKER will tour across Europe, Australia, and North America. Due to high demand, they have added shows in sold out US markets. All dates are on sale now and the full tour is detailed below.

SOFI TUKKER have achieved gold and platinum records in every continent other than Antarctica and their global audience began to coalesce around the streams, eventually creating a community that dubbed itself the Freak Fam. Along with activities related to the group, The Freak Fam have helped each other during this difficult time in both emotional and material ways. When many members of The Freak Fam had their prom canceled and were missing the big moments in their lives, SOFI TUKKER held a virtual prom and encouraged everyone attending to wear their freakiest wares. More recently, The Freak Fam  took the form of a six month SiriusXM radio show, Freak Fam Radio, on Diplo’s Revolution Channel 52 which wrapped up in March.

SOFI TUKKER, the genre-defying duo of Sophie Hawley-Weld and Tucker Halpern, is celebrated for their inclusive and global perspective on electronic music as well as their work’s themes of liberation, unity, and self-empowerment. In 2021, SOFI TUKKER achieved their third Billboard Dance Airplay chart #1 for their collaboration with John Summit on “Sun Came Up,” and they also released a tri-lingual collaboration with Amadou and Mariam, “Mon Cheri”. The band is also frequently tapped for remixes by some of the biggest artists in the world including Billie Eilish, Lady Gaga, and Katy Perry. SOFI TUKKER are also passionate activists who have raised funds and awareness for Planned Parenthood, The Trevor Project, National Alliance on Mental Illness, Natural Resources Defense Council and the March for Our Lives. Their commitment to equality and fostering community while recombining the pillars of dance music into exciting new shapes has established them as a singular act. 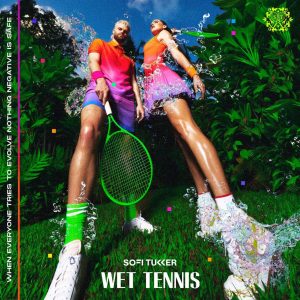 “Forgive Me” with Mahmut Orhan

“Sun Came Up” with John Summit

“What A Wonderful World” 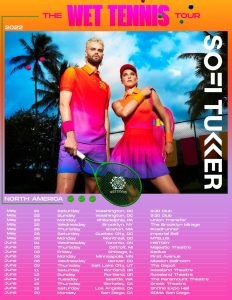