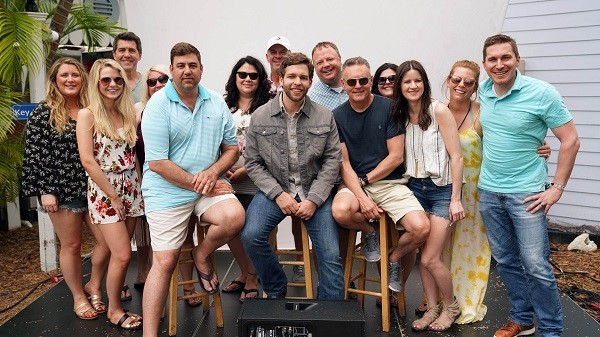 Anderson is spending time with the Sony Music Nashville team as he prepares to launch his debut single soon. He deftly balances traditional sounds and contemporary themes and was signed as a songwriter at Warner Chappell Music, where he has written with some of the most sought-after songwriters in Nashville.

Anderson grew up in Cypress, Texas, a town northwest of Houston where sports dominated daily conversation and Friday night, but Anderson focused on the other Texas pastime: Music.

Anderson’s musical awakening started with Willie Nelson, who he refers to as “his drug” and quickly advanced to George Strait and a long line of musical mavericks. Styles varied, but the common denominator was that even though they were born in Texas their music transcended borders.

Anderson started working in the oil fields at 16 – two years before it was legal – and worked at a grocery store after school to put away enough money to buy a guitar and small PA so he could play the honky tonks and dancehalls around his hometown after graduation. But the goal was always Nashville.

After three tries he cobbled enough money and the necessary co-sign from his grandparents to attend Nashville’s Belmont University. He moved to Music City and immediately started looking for ways to pay the bills. He dropped off his bag and headed downtown to find a gig. He parked on Fourth Avenue across from the Swingin’ Doors Saloon and heard the band playing “In Color.” He walked in, asked to play a few songs, and the manager offered him a job. He went on to play there five more years.

Anderson was the first to graduate college in his family, which had a firmly grounded “go to work or go to war” mentality, but he learned the ropes through hard work, practice, paying his dues in Texas, and playing for tourists and bachelorette parties in Nashville. He focused on “connecting” with his audience, no matter how distracted or inebriated they were. It wasn’t long before more than tourists were taking notice.