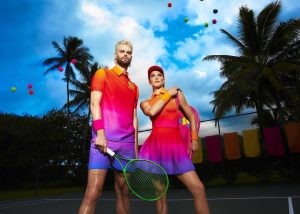 SOFI TUKKER have shared Felix Jaehn’s remix of “Original Sin”, an unforgettable ode to loving yourself and rejecting imposed social mores from their forthcoming album WET TENNIS (out April 29th). Like SOFI TUKKER, Felix’s global influences and inclusive vision has seen his music resonate across the world, topping the charts in multiple countries and becoming the youngest artist with two diamond certifications. Felix puts a spotlight on the song’s tropical elements, building a new jubilant rhythm under Sophie and Tucker’s vocals that turns up the cathartic release of the original.

The group shares, “Felix Jaehn’s remix of Original Sin is a vibe. It feels effortless, like it’s not trying too hard and we love it.“

“I fell in love with ‘Original Sin’ at first listen and I’m grateful for the opportunity to give this melancholic summer anthem my own twist” adds Felix Jaehn.

Earlier this month SOFI TUKKER revealed the cover art and tracklist for WET TENNIS with the release of the haunting ”Forgive Me” and its epic video with dazzling cinematography, styling, and choreography. Read People Magazine’s premiere feature for the video here. The track is one of the album’s meditations on resilience, radical self-acceptance, and joy. “Forgive Me” is a collaboration with Turkish producer Mahmut Orhan whose string arrangement on the song draws inspiration from traditional Turkish music. The video was filmed on location at Evcik Beach and Kilyos Beach in Istanbul and takes us from the confinement of a white box room to the country’s seaside cliffs in a speeding car. Choreographer Tanem Işık, a sixteen year old phenom from Istanbul, created the modern dance piece in the video where she plays Sophie’s double in a battle that depicts Sophie’s battle with negative impulses that get away from her. A group of modern road warriors in surreal gear, including Tucker and Mahmut, race to her side and cast a circle around her as she reconciles with her darker self. The cast wears emerging Turkish fashion designers from NEW GEN.

WATCH THE “FORGIVE ME” MUSIC VIDEO

Following a transcendent headline set at CRSSD festival this month and their show at Belly Up Aspen which raised $19,560 for Red Cross Ukraine, the group have announced additional dates of their WET TENNIS world tour. SOFI TUKKER will tour across Europe and Australia along with the previously announced North American dates. Due to high demand, they have added shows in sold out US markets. All dates are on sale now and the full tour is detailed below.

SOFI TUKKER have achieved gold and platinum records in every continent other than Antarctica and their global audience began to coalesce around the streams, eventually creating a community that dubbed itself the  Freak Fam. Along with activities related to the group, Freak Fam have helped each other during this difficult time in both emotional and material ways. When many members of  Freak Fam had their prom canceled and were missing the big moments in their lives, SOFI TUKKER held a virtual prom and encouraged everyone attending to wear their freakiest wares. More recently, the Freak Fam has taken the form of a bi-weekly SiriusXM radio show, Freak Fam Radio, on Diplo’s Revolution Channel 52 that airs every other Wednesday at 10 PM ET/ 7 PM PT.

SOFI TUKKER, the genre-defying duo of Sophie Hawley-Weld and Tucker Halpern, is celebrated for their inclusive and global perspective on electronic music as well as their work’s themes of liberation, unity, and self-empowerment. In 2021, SOFI TUKKER achieved their third Billboard Dance Airplay chart #1 for their collaboration with John Summit on “Sun Came Up,” and they also released a tri-lingual collaboration with Amadou and Mariam, “Mon Cheri”. The band is also frequently tapped for remixes by some of the biggest artists in the world including Billie Eilish, Lady Gaga, and Katy Perry. SOFI TUKKER are also passionate activists who have raised funds and awareness for Planned Parenthood, The Trevor Project, National Alliance on Mental Illness, Natural Resources Defense Council and the March for Our Lives. Their commitment to equality and fostering community while recombining the pillars of dance music into exciting new shapes has established them as a singular act.

WET TENNIS IS OUT ON APRIL 29TH. 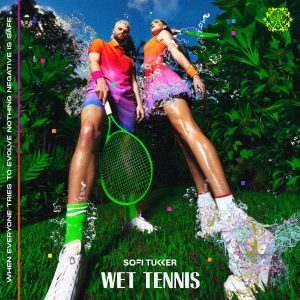 4. “Forgive Me” with Mahmut Orhan 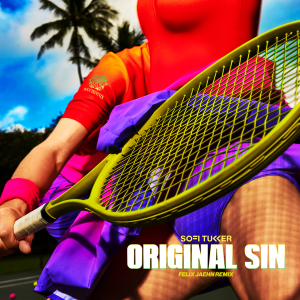 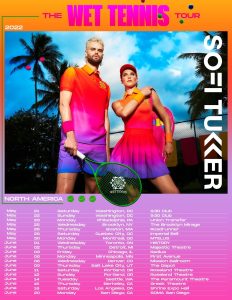