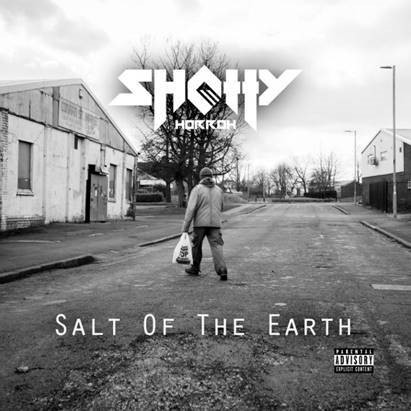 Upcoming performance in Montréal this September

(Toronto, ON – August 24, 2018) – Today, Shotty Horroh announces his forthcoming debut album Salt of The Earth, to be released October 12, via Sony Music Entertainment Canada Inc. Pre-order’s for Salt of The Earth will launch on September 7.

On Salt of the Earth, Shotty Horroh, born Adam Rooney, arrives like the fire-breathing love child of Liam Gallagher, Alex Turner and Sid Vicious: spilling the true blood of Manchester’s council estates, snarling at a system built to hold him down atop crunchy, melodic riffs; it’s the sound of a nation — indeed, a world — in crisis, told by its prodigal son.

When a guitar broke out one night in practice, the kernels of the album, Salt of The Earth, began to pop, and what emerged was the sound of Shotty Horroh’s musical roots. On songs such as “Shudehill,” “Alien,” and “Dirty Old Town,” Horroh digs deep into the reality and rubbish of modern life: at times passionate, aggressive and intense, others heartbreaking and tender. Salt of The Earth was produced by Shotty Horroh, Patrick “P” McKenzie and Jules Lynch at PMCK Studios & OnlyReal Entertainment in Toronto, it was mixed by engineer Patrick “P” Mckenzie with assistance by Brendon “Stretch” McDonald in Toronto, and mastered by Tim Young at Metropolis Mastering in the UK.

“Back home, rock and roll’s always been working class music. As a Mancunian, that sound just resonates more than anything else.” he says. “This is the first time in my career I’m showing people Adam. For years I became Shotty Horroh for safety. Salt of the Earth is stories about Adam. And that’s how it’ll be from now till the end of time.”

The first single, “Shudehill,” came out with a bang, amassing over 185K YouTube views in only a few short weeks. The video showcases Shotty’s rhythmic cadence paired with moody imagery of his hometown of Manchester, United Kingdom. Watch here. On Spotify, “Shudehill” was featured on the Trending Now, Viral Hits Canada and Canada Viral 50 playlists, as well on Apple Music’s Best of The Week playlist, upon release. His follow-up track, “Dirty Old Town,” continued momentum for the album into the summer, which was released in tandem with a captivating visual. Watch here.

This summer Shotty Horroh has performed across the city of Toronto including an opening slot for Wiz Khalifa & Rae Sremmurd’s Dazed & Blazed Tour as well as Toronto’s Festival of Beer at Exhibition Place. Fans can check out the energetic show on September 26 at Petit Campus in Montréal, QC supporting Saint Sister. Keep checking back as more shows to be added here.