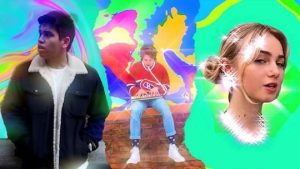 Following a series of solo singles, remixes, and features over the past year, 20-year-old producer/singer Sarcastic Sounds has returned with new song “change ur mind.” Featuring Claire Rosinkranz and fellow Columbia label-mate Clinton Kane, the lo-fi tune is about loving someone even though it’s not enough to save the relationship. Listen HERE.

In speaking about the track, Sarcastic Sounds recalls: “‘change ur mind’ began as a voice note over a year ago. I recorded it last March, but let it sit around for a while not thinking much of it. My manager sent it to Claire, who did an amazing verse for it and made me realize the song could be really special. Then my label suggested getting Clinton on it, who killed it and made the song complete. What I think is so cool about this track is that everyone takes a turn singing the different parts in their own way and interprets them differently. I also appreciate having two actual singers on the song to make up for my voice. :)”

“So stoked Sarcastic thought of me for this song,” says Claire. “I caught a really cool vibe when I first heard the track, which made it really easy to write to.”

Clinton adds: “My team sent this track to me when I was staying at a hotel in Las Vegas. Honestly I was scared to even try it because it was a very different sound from my original music, but I wrote my part in 20 mins; I can now confirm that I am not just a singer/songwriter, but I am also a rapper x The song turned out so amazing, and I’m so stoked to be on this with 2 amazing artists! xx”

“change ur mind” was released alongside an official video featuring all three artists. Sarcastic Sounds, Claire, and Clinton each self-filmed their portions, which editor Sterling Larose then pieced together and layered with fun graphics to create the colorful visual. Watch HERE.

About Sarcastic Sounds:
Hailing from Toronto, Sarcastic Sounds has a very diverse musical direction that blends lo-fi, hip-hop, alternative, and pop. He has cemented himself as a staple in the lo-fi music scene with over 500M streams and previous hits such as “I Don’t Sleep” and “it’s OK to Cry.” In addition to his solo career, Sarcastic Sounds has carved his place as a young producer after garnering buzz from Battle of the Beat Makers and landing a producer credit on “Mahogany” from Lil Wayne’s album Funeral. Recently, Sarcastic Sounds has remixed, produced, and collaborated with the likes of Powfu, Alec Benjamin, Rxseboy, StaySolidRocky, Dermot Kennedy and more.

About Claire Rosinkranz:
At just 16-years-old, singer, songwriter, multi-instrumentalist, and ballerina, Claire Rosinkranz buzzed to the forefront of the conversation this summer with the independent release of her debut EP, BeVerly Hills BoYfRiEnd in June 2020.  Her song “Backyard Boy” gained unprecedented traction on TikTok, inspiring nearly 3 million video recreations, and sparking a highly competitive signing effort from labels around the world.  In addition to generating nearly 80 million Spotify streams, it captured #1 on the Spotify Global and U.S. Viral 50 Charts, with the EP approaching 270 million global streams. With outlets like BuzzFeed, Billboard, Rolling Stone, Coup de Main and Genius chronicling her rapid rise, not to mention The New York Times naming “Backyard Boy” one of their “Best Songs of 2020,” Claire Rosinkranz is poised to become one of the year’s most unexpected and significant breakout acts.

About Clinton Kane:
Clinton Kane is one of those people who actually does all of the things the rest of us wish we could do, such as hightail it to Santorini alone with nothing more than a backpack… The Norwegian-Filipino singer, songwriter, and multi-instrumentalist pens pop with “chords that soothe you and lyrics that bite you.” While growing up between Perth, Australia and The UK, the self-taught singer, guitarist, pianist, and drummer ultimately found solace in music. Writing and performing quelled growing anxiety and stress as he went from popular YouTube covers to a prolific series of independent originals. Signing to Columbia Records, Clinton turned heads with his this is what it feels like EP in 2019. To kick off 2020, he lent his voice to Martin Garrix’s smash “Drown” followed by original solo songs “i don’t want to watch the world end with someone else” and “Fix It To Break It.” After amassing more than 218 million global streams and gaining over half a million followers on TikTok in the past four months, Clinton might just inspire you to live a little louder with new music expected to drop next month.