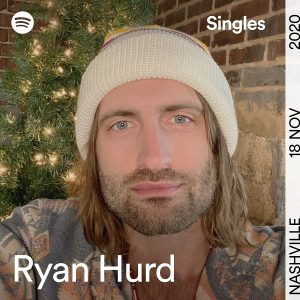 “Recording this tune was really fun because we’re still working remotely on my team so my guitar player, Teddy, and my producer, Aaron, just sent the tracks back and forth through Dropbox, and I got to sing the track at my house,” said Hurd. “It was a really great way to get ready for Christmas. I grew up in Michigan and it just feels like a snow song!”

Driving more than four billion streams since the program began in 2017, Spotify Singles was created to give artists an opportunity to record new versions of their own songs, and the songs of the artists they love. The Singles scope includes a unique version of each artist’s own song (Side A) and a cover song of their choosing (Side B). To date, there have been over 300 Singles recorded as part of the program from artists including John Legend, Norah Jones, Miley Cyrus, Kelly Clarkson, Sam Smith, and Demi Lovato.

About Ryan Hurd: RCA Nashville singer/songwriter Ryan Hurd continues his ubiquitous rise as one of Nashville’s most multi-dimensional, engaging entertainers. Hurd claims co-pen credits on some of the format’s biggest hits including “Lonely Tonight” (Blake Shelton), “Sunrise, Sunburn, Sunset” (Luke Bryan), NSAI Award-winning “What If I Never Get Over You” and “You Look Good” (Lady A), and “Heartless” (Diplo ft. Morgan Wallen). Hurd continues his hit-producing path with captivating tracks including “Every Other Memory,” which was dubbed one of the Best Songs of April 2020 (TIME ) and his Gold-certified Top 20 hit, “To A T,” a No. 1 on SiriusXM The Highway’s Hot 30 Countdown. Lauded for “generating major buzz” and “making waves” (Rolling Stone), the Kalamazoo native has garnered more than 360 million career streams worldwide and caught the attention of entertainment tastemakers including Esquire, GQ, Maxim, American Songwriter, Billboard, People, NBC’s “TODAY,” and more.