RITT MOMNEY REVEALS THE OFFICIAL VIDEO FOR HIS COVER OF 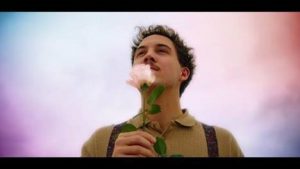 Today, Ritt Momney has shared the official video for his rework of Corinne Bailey Rae’s “Put Your Records On.” An Overcast production directed by Daniel Jordan K, the visual brings to life a young boy’s daydream in which he imagines himself as a future pop star set in a psychedelic dreamscape before it all unravels. Watch HERE. As a nod to the TikTok trend that catapulted the song, influencer Ian Roley joined on set as the makeup artist to recreate the trend’s butterfly motif. Additionally, Ritt will donate his portion of proceeds from the music video to a charity of Corinne’s choosing.

In speaking about the visual, Ritt Momney says:

“In 2006, Corinne Bailey Rae released one of the greatest pop songs of all time with ‘Put Your Records On.’ It was one of my mom’s favorites. She’d blast it in the minivan on the way to soccer practice and we’d all sing.

Fast forward to March 2020 when I got the idea to do a fun little cover of this song I’ve loved my whole life to combat some of the dreariness I was feeling. With this being my first real music video, I was really lucky to work with a bunch of professionals who were also around my age. They did a really good job capturing the essence of the cover, and I’m stoked that I got to work with Ian, the makeup artist who started the TikTok trend.”

Ritt’s version of “Put Your Records On” has become the 21-year-old’s breakout hit of 2020. The song has accumulated over 120M global streams to date with 2M+ TikTok videos made using the sound. Momney’s cover of Rae’s 2006 Grammy-nominated smash marks his first Billboard Hot 100 entry (currently #82) and Pop radio debut, charting at #39 less than two weeks after impacting the format. In Canada, the song reached Top 50 and is already certified GOLD. Topping Spotify’s US, Canada, and Global Viral 50 charts in September, the song is currently #17, #20, and #23 on the platform’s US, Canada, and Global Top 50, respectively, and climbing.