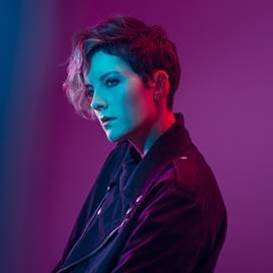 (Toronto- August 17, 2017) Ria Mae premiered her vibrant new music video for “Bend” last night. The video, available on VEVO, is directed by acclaimed filmmaker Stephen Dunn and winner of ‘Best Canadian Feature’ at the 2015 Toronto International Film Festival for Closest Monster. Ria and Stephen, who are both from Atlantic Canada, collaborated over a mutual admiration for each other’s work.

“When I heard that Ria reached out to me to check out the song I knew right away that I wanted to do it,” said Stephen Dunn.  “I really liked the song and I like Ria’s vibe and what she stands for and I really connected with her music as a queer east coast Canadian. I was excited to get on board for this one and do something that’s fun.”

“I am a huge fan of Stephen’s work,” added Ria. “I reached out, not knowing if he would be interested in doing a music video. I am so glad he said yes.”

The video for “Bend,” choreographed by Akira Uchida and performed by Ria, reflects the struggle to leave a relationship with extreme highs and lows and rebuild oneself after heartbreak. “Bend” is Ria’s fastest rising single to date. The track is currently #1 on CBC’s Radio 2 Top 20 Chart for the third week and after a few short weeks is rapidly climbing multiple radio formats including Hot AC (Top 15), AC (Top 20), and CHR (Top 40).  “Bend” is the first single off her forthcoming EP due out later this year. Click to stream or download the track.

The indie-pop star saw rapid success with her critically acclaimed sophomore studio album, Ria Mae. Her breakthrough single, “Clothes Off” quickly accelerated to the top of the charts, reaching certified Platinum status in Canada and earning 13 million combined streams worldwide. The single instantly gained the praise of the press and garnered multiple award nominations including ‘Single of the Year’ at the 2016 JUNO Awards and ‘Best New Canadian Artist’ at the iHeart Radio MMVAs. Internationally, Ria has toured Europe with Tegan & Sara, and across the USA with Coleman Hell. This fall, Ria will join Scott Helman on a co-headlining tour dubbed Scott VS Ria that hits seventeen cities across Canada.  Her tour kicks off in Ottawa at Bronson Centre on October 13th.  For complete list of tour dates or to purchase tickets visit RiaMae.com.