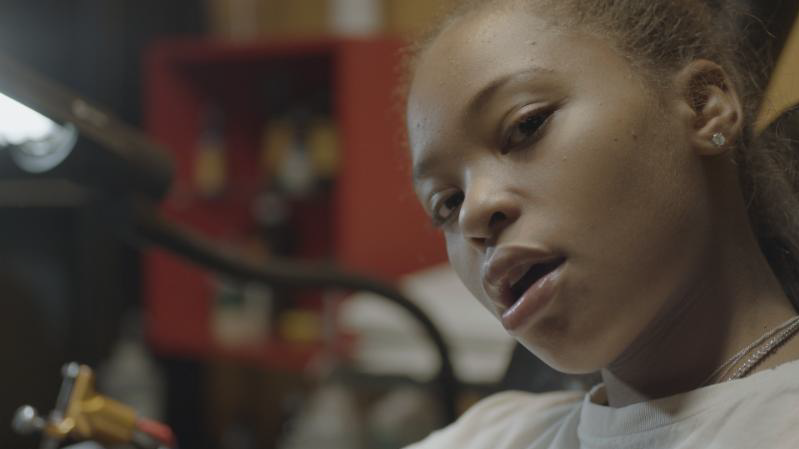 Santa Monica, CA (Monday, September 10th, 2018) Today, Red Bull Music releases a new episode of their documentary series “Remember The Name” featuring Kodie Shane. “Remember The Name” is an in-depth visual storytelling series that follows artists, producers, athletes, and dancers, as they navigate through the trials and tribulations of the pressure-filled moments that arise in a budding creative’s career while they take a moment to reflect on where they’ve been, where they are and where they strive to be.

“Remember The Name: Kodie Shane” captures the revelatory and charismatic 19-year-old rapper with roots in both Chicago and Atlanta as she heads into her biggest show to date, opening up for Kehlani during Red Bull Music’s 30 Days in Chicago last year, an event which the Huffington Post described as “an incubator for creativity.”

In the episode, we discover Kodie to be an artist with immense potential who caught the attention of young fans and artists alike. Pitchfork called her “The Fearless Hip-Hop Prodigy We Need,” and her highly-praised music is a clear byproduct of her self-confidence which has been nurtured by the strong women in her life like her mother who doubles as her manager. Kodie is unapologetically queer and comfortable in her own skin; by shattering preconceived norms around gender and sexuality, she serves as a role model for others as they struggle to define their own experiences and identities.

Set to release her debut studio album later this year on Epic Records, Kodie Shane has truly established herself as one of the industry’s freshest and fieriest voices. Recently, Kodie shared singles “Love & Drugz II” ft. Trippie Redd, Sing To Her and Flex On Me Ft. TK Kravitz in anticipation of the album’s release, along with official videos for “Sing To Her” (watch HERE) and “Love & Drugz II” (watch HERE). With “Love & Drugz II” already amassing over 4.6M+ worldwide streams, Kodie’s new music has been featured across notable playlists like Spotify’s Most Necessary, Hot Rhythmic, The Newness, The Realest Down South and more.

A critical darling, Kodie has released a slew of EPs and Mixtapes building up to her debut album, which have garnered her praise from the like of The FADER, Complex, Vogue, W, ELLE, Interview and more with Billboard calling her one of 2018’s biggest Pop Stars to watch and Teen Vogue deeming her one of their 21 most influential under 21, putting her on their cover. With her fresh take on hip hop and pop, Kodie has also established herself as a live force, having headlined a packed cross-country tour and supported the likes of Lil Uzi Vert, Billie Eilish, Lil Yachty, Snakehips, SYD from The Internet and Jhene Aiko.

For 20 years, Red Bull has been committed to moving culture forward across the globe by giving wings to artists and their ideas. Red Bull Music is a continuation of this commitment. With multiple Red Bull Music Festivals, music education workshops, collaborations with artists and thousands of initiatives supporting local music communities around the world, the program celebrates music, its culture and the transformative minds behind it.