With CHENCHO CORLEONE To No. 1 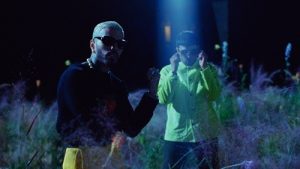 MIAMI (December 9, 2021) – Fresh off his Latin GRAMMY® win and GRAMMY® nomination, breakout Latin music sensation Rauw Alejandro has dropped a new track “Desesperados” with Chencho Corleone, which has been added to his No. 1 album VICE VERSA in place of “TRACK 4.” In addition, Rauw unveiled new album art! Listen to “Desesperados” HERE!

The new track was released alongside a spicy music video, starring both Rauw and Chencho Corleone—watch it HERE!

This new release comes on the heels of Rauw’s album Afrodisíaco being nominated for “Best Música Urbana Album” at the upcoming 64th annual GRAMMY Awards. Rauw also took home a Latin GRAMMY® Award for “Best Urban Fusion/Performance” alongside Camilo for their hit “Tattoo Remix” last month. Rauw was nominated for three Awards including “Record Of The Year” for “Todo De Ti”, “Song Of The Year” for “Todo De Ti” and “Best Urban Fusion/Performance.” In addition, he scored two awards at the Los 40 in Mallorca, the most important award show in Spain, for “Best International Latin Artist” and “Best Urban Artist.”

Rauw is also continuing his tour with upcoming shows this month in Mesquite, TX, Orlando, FL & Duluth, GA! He will also perform at the Calibash in Los Angeles on January 15, 2022 before picking back up his US tour in April 2022 with shows in New York, Miami, Los Angeles, San Jose and more! Get tickets HERE!

Rauw’s explosive platinum album VICE VERSA, which debuted at No. 1 on Billboard’s “Top Latin Album” chart, making it Rauw’s first No. 1 album on any Billboard albums chart! The album has accumulated over 1.5 billion streams to date and features Rauw’s mega-hit “Todo De Ti”. which so far boasts more than 783 million streams to date. The track peaked at #36 on Billboard’s HOT 100 and broke records in Spain with 1.68 million streams in a single day, reaching the top of the charts in Spain, Mexico, Colombia, Chile, Peru, Costa Rica, El Salvador, Guatemala, Panama, Nicaragua, Honduras and the Dominican Republic.

Puerto Rican singer and songwriter Rauw Alejandro has been leading the new generation of Latin music artists since he appeared on the scene in 2017. Rauw has released Gold, Platinum and Multi-Platinum records such as “Que Le De” and “Fantasías.”

During the pandemic, he performed one of the most iconic virtual concerts of the year in front of more than one million YouTube viewers in real time from the Coliseo de Puerto Rico, becoming a #1 YouTube trend in 14 countries.

In November of 2020, Rauw released the album Afrodisíaco to rave reviews, reaching Gold status in the US and Colombia through such chart-toppers as “Tattoo,” “Tattoo Remix” with Camilo, “Enchule,” “Reloj” with Anuel AA, and “De Cora <3” with J Balvin.

In May of this year, Rauw dropped “Todo De Ti” – a mega-hit that so far boasts more than 783 Million audio and video streams worldwide. The track reached #2 on Spotify’s Global chart for over three weeks, peaking at #36 on Billboard’s HOT 100. It also broke records in Spain with 1.68 million streams in a single day, reaching the top of the charts in Spain, Mexico, Colombia, Chile, Peru, Costa Rica, El Salvador, Guatemala, Panama, Nicaragua, Honduras and the Dominican Republic.

His worldwide sold-out tour began in July in the USA, with stops in Spain and his hometown of Puerto Rico – four sold-out shows at the Coliseo de Puerto Rico, Dominican Republic among others. He is scheduled to start his arena tours in 2022.

Rauw rounded out a successful year taking home a Latin Grammy for his “Tattoo Remix” alongside Camilo for Best Latin Fusion. His album Vice Versa made it to number three on Rolling Stones’ Best Albums of 2021.