QUINN XCII’S DEBUT ALBUM THE STORY OF US OUT TODAY 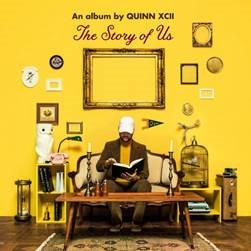 “Quinn is perfectly cool with his devil-may-care falsetto.” –Billboard

“Quinn XCII knows how to make a quality pop record with honesty.” –Complex

The Story Of Us, the debut album from Detroit-bred vocalist/songwriter Quinn XCII, is available everywhere today: http://smarturl.it/QuinnXCIITSOU

Filled with authenticity and grassroots appeal, the album is highlighted by standout single “Straightjacket,” a track that combines stylish retro-electronic chops with a sultry reggae snap into its own pop sound about a “psycho from a Midwest suburb,” as Quinn explains. Listen to previously released album tracks including “Always Been You,” “Worst,” and “Fake Denim.”

Quinn XCII explains: “I wanted the album title ‘The Story Of Us’ to really represent that I’m just like everyone else and go through similar experiences. The songs are relatable and touch on all different topics and emotions—new, old, good and bad relationships, growth, memories, temptation, and challenges. I’m just a kid from the Midwest. My life isn’t this unattainable fantasy, I didn’t have an angle or connections to the music industry. I just worked hard to turn my passion into a career, anyone can do the same in whatever they’re pursuing.”

To celebrate the release of The Story Of Us, Quinn XCII will embark on his first national headlining tour this fall, with more than half of the dates selling out weeks in advance! The 30-date tour kicks off September 24 in Salt Lake City, UT and wraps on November 7 in Portland, OR. The tour’s only Canadian stop is in Toronto, ON on October 7. See below for all tour dates.

About Quinn XCII:
With his ability to seamlessly blur the lines between pop, hip-hop, electronic and soul, Quinn XCII has quickly paved his own lane with his unique sound. An early mixtape release turned heads, but it was his debut EP Change of Scenery, released in 2015, that put Quinn XCII on the map, connecting with the blogosphere and snaring millions of online streams. His track “Stung” hit #1 on Hype Machine, and a follow-up EP, 2016’s Bloom, cemented his ability to meld styles and write about more varied subject matter. Quinn XCII’s featured vocals on “Kings of Summer,” a collaboration with childhood friend and frequent collaborator, producer ayokay, reached #1 on Spotify’s Global Viral chart and #1 on Hype Machine, accumulating 65 million plays on Spotify. All signs point to yet another hit with “Straightjacket,” which was named SoundCloud’s “Song of the Month” this past January and reached #3 on SoundCloud’s Pop chart; at Spotify, “Straightjacket” has been streamed nearly 20 million times around the globe, with three million monthly listeners.