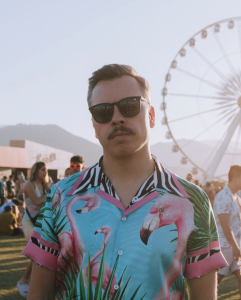 PERFORMING IN TORONTO AT
LOVE CHILD SOCIAL HOUSE ON MAY 29

TORONTO, ON – May 12, 2022 – After a very successful European campaign for the album, Exotica, which brought Purple Disco Machine his first Top 10 album in Germany, as well as a top position in the European Airplay Charts with In the Dark with Sophie and the Giants, Tino Piontek, aka Purple Disco Machine, expands his collaboration with Sony Music/ Columbia to the worldwide market (ex. Australia).

The Dresden-based DJ’s global success started in Berlin when Sony Music Germany signed the artist for the European market in 2017. Thanks to a highly effective data and track-based release strategy, the Sony Music team successfully marketed the artist both in markets heavily dominated by radio, such as Germany, Italy or France, and in markets dominated by streaming.

With its nu-disco and upbeat sound, Purple Disco Machine quickly wowed fans worldwide and produced a number of remixes for some of the world’s biggest stars, including Diplo, Dua Lipa and Mark Ronson. Currently, the artist reports over one billion streams. In the Dark has held at the top of the German airplay charts for six weeks, Piontek’s fourth radio hit, following Dopamine, Fireworks and Hypnotized.

June 3 marks the release of Purple Disco Machine’s new single, Wake Up! which the Dresden-based DJ and producer first performed at his acclaimed Coachella gig. Wake Up! is the first of numerous new tracks in the pipeline. His releases will also be flanked by high-profile live shows at Lollapalooza, Parookaville, and Tomorrowland, as well as a performance in Toronto at Love Child Social House on May 29.

Seb Permal, Vice President A&R, Sony Music Entertainment Continental Europe & Africa: “Purple Disco Machine’s unique impact on dance culture is mainly due to the fact that he has stayed true to what he loves and has never compromised. As a label, we want to do the same and respect the artist and his culture. We look forward to continuing to work with Tino!”