PRINCESS NOKIA RELEASES “IT’S NOT MY FAULT,” A FIERY ODE TO ONLYFANS VIA ARISTA RECORDS 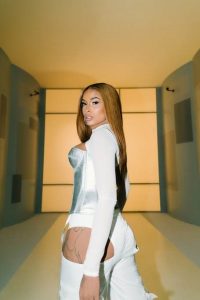 Today, Princess Nokia releases her major label debut single “It’s Not My Fault” via Arista Records. The track is directly influenced by the content subscription site OnlyFans that boomed in 2020, as Princess Nokia is one of the top celebrities to join the platform and unabashedly takes ownership of her body and distigmatizes sex work. The track is accompanied by a stunning retro-futuristic music video co-starring mid90s actor Olan Prenatt and directed by Sebastian Sdaigui, which pays homage to JLo’s “If You Had My Love.” The intention of both Princess Nokia’s and JLo’s videos “puts a new spin on the traditional female position as object of the gaze”, where the artist present themselves “as an objective of interactivity” [Lisa Nakamura, Digitizing Race: Visual Cultures of the Internet (2008)].

Princess Nokia says, “My video symbolizes my mainstream coming of age, just as it did Jennifer’s. It symbolizes the average millennial woman, taking control of herself as the subject. I control my narrative and I celebrate my beauty. It’s hyper-futurism and almost 22 years later we are moving into a more interactive era.”

“It’s Not My Fault” follows Princess Nokia’s 2020 global smash hit “I Like Him,” which garnered over 2.1 BILLION views across 2.9 MILLION videos for the track on TikTok – including one by Congresswoman Alexandria Ocasio-Cortez – and it earned more than 150 MILLION streams across DSPs. She was also in conversation with AOC as part of the Fridays For Unity election event where the Bronx natives dove into their shared roots, the state of U.S. politics, vulnerable stories of the vitriol they have faced throughout their lives, and the hope they have for the future.

The New York Times Magazine says Princess Nokia has “what it takes to light up the stage,” spotlighting her as one of 12 performers to watch in an issue out in 2019. Following a series of releases, in 2017 she infiltrated the cultural conversation with her independent breakthrough, 1992 Deluxe. Not only did it reach the Top 25 on the Billboard Heatseekers Chart, but NME pegged it among “The Albums of the Year,” Noisey graded it “A,” and The Guardian rated it 4-out-of-5 stars. Regularly selling out headline tours and consistently churning out tens of millions of streams, she keeps her business independent with calculated moves to be heard even louder—ranging from hosting an Apple Music Beats 1 Radio show “The Voice in My Head with Princess Nokia” to making her acting debut starring in Angelfish, with additional acting credits and entrepreneurial endeavors to be announced soon.