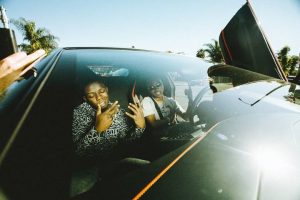 (Toronto, ON – December 18, 2020) – On December 16, after his livestream event on Happin.App, Pressa surprised concertgoers with a sneak peak of the official video for “Blackberry Zap” ft. Jackboy. Today, the video is out on streaming platforms for all fans to enjoy, click HERE to watch. Affiliated with Kodak Black, Jackboy is one Florida’s hottest new rappers out, with a handful of A-list features and co-signs from XXL and The Source. The song is a departure from the hard, street tracks Pressa is known for, but still feels authentic by meshing both rappers’ melodic rap styles with Jackboy’s southern Florida charm.

Produced by MVA Studios, and shot by Michael Vincent in Los Angeles, the highly stylized video journeys through a day of altercations with enemies, but also celebrating life with your close friends. Whether they’re riding around in a Lamborghini together or vibing on the stoop, Jackboy and Pressa show us how to thrive despite your circumstances. “Blackberry Zap” was produced by fellow Canadian producer Bijan Amir (Killy, Metro Boomin, Bryson Tiller), written by Pressa and Jackboy, and mixed by Joey Galvan (Meek Mill, French Montana, Travis Scott).

The video for “Blackberry Zap” ft. Jackboy comes one week after the release of Pressa’s major label debut EP, Gardner Express. The EP currently resides in the top 10 on Apple Music’s Top Albums Chart ahead of its Billboard Chart debut, received top playlist support on all DSPs, and has already accumulated over 14.3M total worldwide audio streams to date. In Pressa’s hometown, Gardner Express received major support with a downtown Toronto Billboard takeover via partners Spotify and Amazon Music on release day. Poised for a takeover in the U.S. as well, HotNewHipHop writes that the EP “showcases his growth, charisma, and penchant for making bangers.” Pressa plans to continue that reign in 2021 with more new music on the way.

No stranger to releasing full bodies of work with mixtapes such as, Press Machine, Press A Brick, and Prestige, 2020 was a prime display of Pressa’s growth and versatility as an artist, culminating with the release of his EP, Gardner Express. The EP features “OTM,” “96 Freestyle,” and “Head Tap” ft. Sheff G and Sleepy Hallow, which resulted in coverage from media juggernauts like Complex, a global Apple Music Beats 1 premiere with Ebro Darden, and over 10.5M worldwide global streams, together to date.