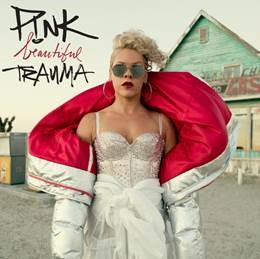 (New York, NY – May 21, 2018) – Global superstar P!NK’s seventh studio Beautiful Trauma returns to #1 on the Canadian Nielsen Soundscan Sales Chart and #2 on the Billboard Canadian Albums chart. Beautiful Trauma jumps back to #2 on the U.S. Billboard 200 Chart and #1 on the U.S. Top Album Sales Chart.  Since its release in October 2017 via RCA Records, the album has been certified RIAA platinum in the US and has sold over 2.6 million album equivalents worldwide with over 1 billion audio streams and 400 million video views.  Overseas, the album is certified either gold or platinum in 12 other countries as well as 4X platinum in Australia.

The album spawned the highly successful first single, “What About Us” which is certified RIAA platinum in the US, received a Grammy nomination for Best Pop Vocal and reached #1 on the U.S. Adult Pop Songs chart earning her ninth leader on the chart, the most number-ones at the format for a female (second overall).  The music video for her next official single “Whatever You Want” follows P!NK behind the scenes in the studio, in tour rehearsals, at promotional appearances for her album Beautiful Trauma as well as personal footage of P!NK and husband Carey Hart throughout the years.

Earlier this month, P!NK announced more dates to her phenomenally successful and critically acclaimed Beautiful Trauma World Tour. The tour, which has sold over 1 million tickets in North America, will see P!NK performing and entertaining fans across the globe until well into 2019. For more information on the tour and tickets please visit: www.beautifultraumatour.com.

This past year, P!NK has been seen all over television including performing her stunning rendition of the National Anthem at Super Bowl LII, a heartfelt performance at the 60th Annual Grammy Awards, her awe-inspiring performance on the side of a building at the 2017 American Music Awards and so many more memorable performance and appearances.  P!NK could be seen on the covers of Cosmopolitan, Redbook Magazine and the coveted People Magazine’s The Beautiful Issue.

Since her debut in 2000, P!NK has released 7 studio albums, 1 greatest hits album, sold over 50 million albums equivalents, over 75 million singles, over 2.4 million DVDs worldwide and has had 15 singles in the top 10 on the U.S. Billboard Hot 100 chart (four at #1). In addition, she is the recipient of three Grammy® Awards (19 nominations), one Daytime Emmy Award, three U.S. Billboard Music Awards, seven MTV Video Music Awards (including the 2017 Michael Jackson Vanguard Award recipient), two MTV Europe Awards, two People’s Choice Awards, was named U.S. Billboard’s Woman of the Year in 2013 and has sold out arenas all over the world.  Her seventh studio album, Beautiful Trauma is certified platinum, debuted at #1 on Billboard’s 200 chart and marked a career high for first week sales.  Additionally, the album debuted at #1 in Canada and 9 other countries.

To Purchase or Listen Beautiful Trauma