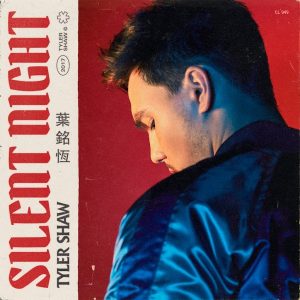 (December 1, 2017) – Right in time for the holidays, Tyler Shaw, releases today his rendition of the Christmas classic “Silent Night.” Listen to the track here. The Platinum-selling Canadian singer/songwriter/producer kicks off the festive season with a melodic take on the iconic track, while also this week teasing a brand new single coming in January 2018.

The multi-talented artist recently exercised his acting skills as the lead role in the feature film The Meaning of Life, which premiered this past summer, and this week Tyler also performed at WE Day Halifax.

Coquitlam, BC native, Tyler Shaw, entered the music scene in 2012 with his striking Platinum single, “Kiss Goodnight.” Continuing his rise to fame, in 2014 Tyler was nominated for a JUNO Award for ‘Breakthrough Artist of the Year.’ He released his debut album Yesterday on September 4, 2015, which also features the Gold tracks, “House of Cards,” and “Wicked.” Tyler has performed for HRH Prince Harry and Prime Minister Justin Trudeau at the Invictus Games launch in Toronto, and landed opening slots with major artists including Selena Gomez, Shawn Mendes, Alessia Cara.