SET TO HIT THE ROAD ON TOUR WITH MARC E. BASSY THIS WINTER,

KICKING OFF 2/14 IN MINNEAPOLIS 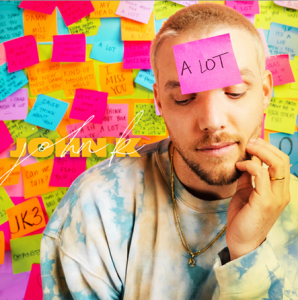 (January 14, 2022)  – Kicking off 2022 and another chapter with a bang, RIAA-certified platinum singer/songwriter John K unveils a brand-new single entitled “A LOT” today. Listen to it HERE via Epic Records and watch the official music video HERE.

The WYNNE [MGK, Jaden Smith] produced track sees John teaming up again with songwriter Steph Jones, with who he co-wrote his hit single “if we never met.” In “A LOT,” he ponders the dissolution of a relationship as a head-nodding clean guitar riff bops in the background. Thinking of his ex, he wonders, “Do you ever wear my sweatshirt when it’s colder?” While the chorus takes flight, finger-snaps underscore his hypnotic high register as he confesses, “I think about you a lot.”

“I never realized how often I say the word ‘a lot’ until I wrote this song,” explains John. “The story is about that feeling when you can’t get someone out of your head, except for now that person is out of the picture. It’s about replaying memories over and over, thinking about the person you wish you never lost. A simple concept really, but I felt like it was one my fans would relate to right away. You ever mess something up so bad and then all you have left is the memory of how good it used to be? That’s A LOT.”

Directed by Erik Rojas [Jessie J, Dillon Francis], the accompanying visual brings his words to life. It intercuts memories of happier moments with vignettes of John K alone in the bar and even dancing outside—as bewildered neighbors watch.

Next up, JOHN K is set to support Marc E. Bassy on his North American winter tour. It kicks off on February 14 at the Varsity Theater in Minneapolis, MN, visits major markets coast-to-coast, and concludes March 12 in San Diego, CA at Observatory North Park. Check out the full itinerary below and visit www.ticketmaster.com to purchase tickets.

“A LOT” notably marks his first new music since his debut album in case you miss me in 2021.  in case you me has racked up millions of streams and earned critical acclaim. Billboard championed the single “everything” and went on to write, “the song muses on connection under extreme circumstance…John K is too talented not to pull off the concept.” Pop Nerd Lounge described the album as “put together brilliantly,” and Pop Inquirer added, “John K has yet again given us an album that will surely have us playing it on repeat.” Now, with the release of “A LOT,” stay tuned for a lot more from John K soon, with more new music to be released this year.

John K will admit he sets out to make “timeless music,” but it’s not all talk. The platinum-certified Orlando-born and Los Angeles-based singer and songwriter plunks down and actually puts in the work to realize his ambition. Since 2017, he’s unassumingly exceeded one benchmark after another. Thus far, he’s posted up over half-a-billion career streams, earned a platinum certification for the breakthrough “if we never met,” garnered praise from Billboard, Flaunt, L’Officiel, and Rolling Stone, sold out headline gigs, performed on The TODAY Show, and collaborated with everyone from Kelsea Ballerini and Don Diablo to Loote, teamwork., and ROSIE. In 2020, he aimed to “drop a project in quarantine” in order to maintain his momentum even as the world shutdown. So, he unveiled the ten-track tape love + everything else. Inciting critical acclaim, MTV promised, “love + everything else has a song for every mood,” while FLAUNT raved, “John K is a whole vibe, and he’s here to take the music industry by storm.” However, all of that work set the stage for his 2021 full-length debut album, in case you miss me [Epic Records]. Now, in 2022, he continues to craft the relatable and timeless music he’s made his name for. 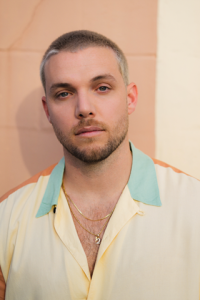