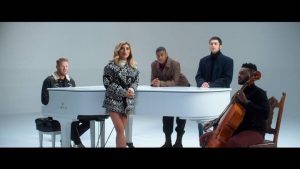 THE NEW HOLIDAY ALBUM – WE NEED A LITTLE CHRISTMAS –

CATCH PENTATONIX PERFORMING AT THE

“THE WONDERFUL WORLD OF DISNEY: MAGICAL HOLIDAY CELEBRATION” AND

(November 25, 2020) Today, Three-time Grammy® Award-winning and multi-platinum-selling artist Pentatonix have premiered the music video for their original ballad, “Thank You,” from their new holiday collection We Need A Little Christmas. The track and video pay homage to those in and around our lives who have made the past year just a little bit brighter and features Scott Hoying on piano and Kevin “K.O.” Olusola on cello in addition to the quintet signature vocals.   Watch the music video here.

Released earlier this month, We Need A Little Christmas is the sixth holiday album Pentatonix have released.  The five previous albums from the Pentatonix holiday collection (which includes 2x platinum-selling That’s Christmas To Me) have sold almost 13 million albums worldwide. Get the new album here.

Tomorrow, Pentatonix will return to the Macy’s Thanksgiving Day Parade on NBC at 9 a.m. (all time zones) while in the evening, fans can tune in to “The Wonderful World of Disney: Magical Holiday Celebration” where Pentatonix’s 2019 performance of “Deck The Halls” will be featured once again on ABC at 9 p.m. ET/PT. Next Wednesday, Pentatonix will perform on NBC’s ‘Christmas In Rockefeller Center’ Special which will air at 8 p.m. ET/PT.

Pentatonix has had two #1 albums on Billboard’s Top 200 Chart – 2015’s gold-certified self-titled album and the 2x platinum That’s Christmas To Me. Additionally, all ten Pentatonix releases have reached the top 10 on the Billboard Charts. The group has received multiple RIAA certifications for multi-platinum, platinum and gold-selling albums and singles, a Daytime Emmy nomination, starred in three holiday specials on NBC and appeared in the feature film Pitch Perfect 2. In October of 2019, Pentatonix released a compilation of their biggest holiday songs, The Best of Pentatonix Christmas, which included their multiplatinum singles “Hallelujah” and “Mary, Did You Know?” and collaborations with Kelly Clarkson, Maren Morris, Jennifer Hudson, Tori Kelly, Jazmine Sullivan and a duet featuring Whitney Houston.

Earlier this year, Pentatonix released their At Home EP, which features 6 tracks and original music videos for their medley “Home”, along with new arrangements of “Blinding Lights” (The Weeknd), “when the party’s over” (Billie Eilish), “Break My Heart” (Dua Lipa) and “Dreams” (The Cranberries). Shortly after releasing their At Home EP, the group debuted their arrangement and video for Tears for Fears’ “Mad World.” In addition, the group released their first original singles in over 5 years for “Happy Now” and “Be My Eyes”, along with official videos for both tracks. Their new original album, The Lucky Ones, features these tracks, along with more original songs coming February 12th, 2021.