YOU AND YOUR FRIENDS APRIL 3 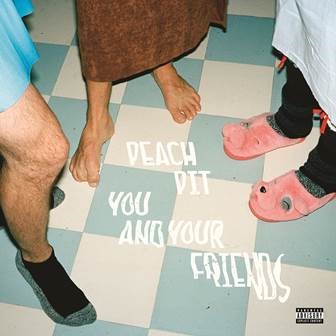 Today, Peach Pit has announced that their sophomore album You and Your Friends will be released April 3 via Columbia Records. Watch the band’s album trailer HERE. The 12-track LP was produced by John Congleton [St. Vincent, Best Coast] and features new song “Black Licorice” as well as previously released tunes “Feelin’ Low (F*ckboy Blues)” and “Shampoo Bottles.” Pre-order/pre-save You and Your Friends HERE and see full tracklist below.

In speaking about the announcement, Peach Pit’s lead-singer Neil Smith says: “You and Your Friends is a collection of songs about me, people that the band and I care about, and some of the old friends we’ve had over the years. All the songs are written from true stories, some have been exaggerated more than others. We can’t wait to finally let go of it and start playing these songs for you out on the road!”

Due to popular demand, Peach Pit has added new dates to their upcoming headline tour, which kicks off this spring in support of You and Your Friends. The first North American leg begins on April 23 in Calgary, AB with sold-out shows in Toronto, Montreal, Vancouver, and more before Peach Pit brings their show to Europe. The band will return to the US for the West Coast run of dates, including two shows at The Fonda in LA, beginning June 16 in Phoenix, AZ. Tickets are on sale now, visit http://peachpitmusic.com/ for more information.

You and Your Friends Tracklist:

05/07 Philadelphia, PA The Foundry at The Fillmore (SOLD-OUT) 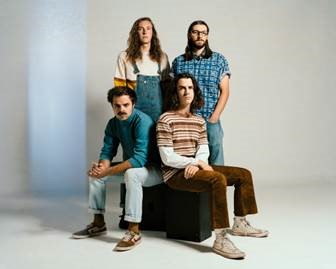 Peach Pit’s songs feel like a close friend telling you a story. The Vancouver quartet—Neil Smith [vocals, guitar], Chris Vanderkooy [guitar], Peter Wilton [bass], and Mikey Pascuzzi [drums]—refine this signature storytelling over a soundtrack of breezy guitars and some ballsy distortion on their forthcoming sophomore album, expected this spring via Columbia Records.

As legend has it, these high school buddies from North of the Border achieved a major breakthrough in 2016 with their self-titled viral anthem, “Peach Pit.” It has accrued over 32 million Spotify streams and heralded the Sweet FA EP in 2017, which also includes their hit single “Seventeen.” Meanwhile, the band’s 2017 full-length debut Being So Normal yielded a string of off-kilter anthems a la “Tommy’s Party” [19 million streams], “Alrighty Aphrodite” [16.5 million streams], and “Drop the Guillotine” [10.8 million streams]. Along the way, they have built a cult following in large part due to their stellar live show. Peach Pit supported Two Door Cinema Club in the US this fall and have performed everywhere from Bonnaroo, Shaky Knees Music Festival, and Bumbershoot to Capital Hill Block Party in addition to attracting acclaim from Vice, Substream, Exclaim, and more.

Peach Pit began 2020 with their latest release “Shampoo Bottles,” which will be featured on their forthcoming sophomore album this spring. The song brought a new melancholy tone to the band’s style while describing the familiar daily reminders of lost love. The nostalgically comforting track reminds you that everyone copes with breakups in their own, sometimes quirky and amusing, ways.

In speaking about the new single, Peach Pit’s lead singer Neil Smith says: “‘Shampoo Bottles’ is a song about the stuff my ex-girlfriend left at my apartment after we broke up (deodorant, shampoo, cell phone charger) and how even after I’d used up all the soap in the bottle and the deodorant in the stick, I still didn’t throw them out for a while. The video, directed by our longtime collaborator Lester Lyons-Hookham, has four protagonists each mourning the end of something. It shows how coping with a loss can make you do weird things.”

In the end, you’ll remember these songs (and stories) for a long time to come.