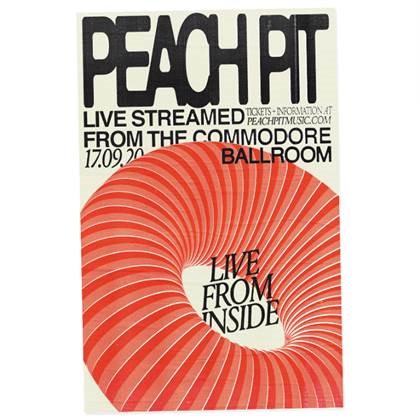 Today, Peach Pit has announced their participation in Live From Inside, a multi-part livestream broadcast series launched by Live Nation Canada and Embrace. The series will feature various performances from the Commodore Ballroom (Vancouver) and the Velvet Underground (Toronto), with Peach Pit confirmed to play live from the Commodore Ballroom on September 17. Their performance will be streamed in real-time at 6pm PT/9pm ET in North & South America, with a separate performance for the EU and rest of the world at 11am PT.

Peach Pit’s set will include songs from their debut album Being So Normal as well as tracks from their sophomore album You and Your Friends, which was released in April. Since the band postponed their sold-out headline tour originally slated for the spring, their Live From Inside set is the first time the band will perform tracks from the new album for fans. Utilizing a new state-of-the-art platform, FanXP, viewers will be able to stream the live performance in high definition, which will showcase full concert lighting and production.

Tickets for each livestream are on sale now at www.livefrominside.ca. In addition to benefiting Canadian artists during this unprecedented time for live music, Live From Inside will feature a local charity selected by each artist that will receive a proceed of ticket sales. Peach Pit has announced that $1 from each ticket sold will directly support the Downtown Eastside Women’s Centre (DEWC), a women-only space that operates a drop-in centre and 24-hour emergency shelter in the band’s hometown of Vancouver, BC’s Downtown Eastside. DEWC provides daily meals, basic needs, and advocacy programs, which nurture and empower women experiencing extreme poverty, violence, and food insecurity. Visit https://dewc.ca/ for more information.