DELUXE VERSION OF SOPHOMORE ALBUM YOU AND YOUR FRIENDS 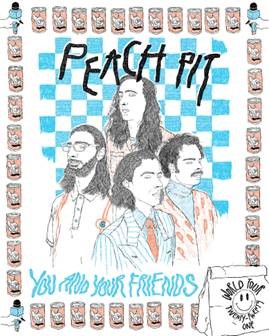 On the heels of their Live Nation livestream concert last night, Peach Pit has announced new dates for their North American headline tour, which was originally slated for spring 2020. The tour will now kick off on Monday, March 1, 2021 in Victoria, BC and will see the band hitting larger venues, with shows at NY’s Brooklyn Steel, Washington D.C.’s 9:30 Club, and two nights at LA’s Fonda Theatre. New shows have been added in Ottawa, ON, Buffalo, NY, Richmond, VA, Asheville, NC, Columbus, OH, Austin, Houston and Dallas, TX. Unfortunately the shows at Off Broadway Nightclub in St. Louis, MO and The Bowery Ballroom in New York, NY have been cancelled; refunds are available at point of purchase.

In speaking about the tour announcement, Peach Pit front man Neil Smith says: “We’re so excited to announce the rescheduled and new tour dates for 2021. Assuming that guidance from our public health officials tells us it’s safe to be on the road, we can’t wait to get out and make up for lost time and play the songs from You and Your Friends live.”

Peach Pit has also shared that the deluxe version of their sophomore album You and Your Friends will be released on October 2 via Columbia Records. It will include three additional tracks titled “Adidas,” “Denny’s Garage,” and fan favorite “Psychics in LA,” which the band has been performing live on tour for the past year. See full track list below.