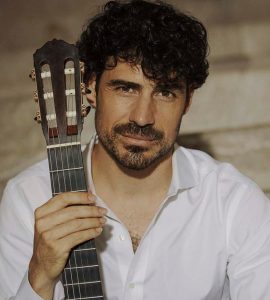 Duo Album with Plácido Domingo to be released 2018

Toronto, Ontario — February 1, 2018  –  Sony Classical is proud to announce the signing of the New York-based Spanish guitarist Pablo Sáinz-Villegas to the label. Sáinz-Villegas’ first album, due for release in 2018, will be a programme of songs with the legendary singer Plácido Domingo.

Domingo, a passionate supporter of the guitarist, has performed with Sáinz-Villegas many times, and has hailed him as ‘the master of the guitar.’ This is just one of the many notable plaudits which Sáinz-Villegas’ superb musicianship has attracted. The New York Times praised his ‘virtuosic playing characterized by its vividly shaded colors and irresistible exuberance’, and Billboard magazine named him ‘the global ambassador of the Spanish guitar.’

Sáinz-Villegas has performed in some of the most prestigious concert halls in Europe and America, including New York’s Carnegie Hall, the Berlin Philharmonie, the Amsterdam Concertgebouw, the Vienna Musikverein, and the Tchaikovsky Hall in Moscow. In addition to his appearances in these familiar venues, he thrills to the challenge of bringing the sound of the guitar to much bigger audiences elsewhere too: there were over 85,000 spectators present when he appeared in the Santiago Bernabéu Stadium in Madrid (home of the Real Madrid football team), and his performance with Plácido Domingo on a floating stage on the Amazon River was live streamed worldwide.

Sáinz-Villegas is a champion of developing new repertoire for the Spanish guitar, and has given the world premiere of many orchestral concerto works and pieces for the instrument. He gave the world premiere of Rounds, the first composition for guitar by the five-time Academy Award winner John T. Williams (composer of soundtracks to Jaws, Star Wars, and Close Encounters of the Third Kind among others).He is the recipient of numerous awards and honours, including the Andrés Segovia award when he was just 15, and he was the first guitarist ever to win the top classical music prize by the National Radio of Spain.

He was born in La Rioja in Northern Spain, and began to take guitar lessons at the age of six. He gave his first public performance at just seven, and went on to further his studies in Madrid, Weimar and New York.

Passionate about music as a force for social change, Sáinz-Villegas over the last decade has created projects that bring music beyond the performance halls through volunteering his time, establishing music programs, visiting schools and creating unique community activities. So far, his initiatives have reached thousands around the globe and continue to thrive.

“Sharing my music with people, whether a small or large audience continues to infuse my drive. People I play for and meet around the world constantly inspire me to give the best of myself and to push my own boundaries in creating the best possible experience. I hope to inspire them through music as much as they have inspired me. I do what I do to share the magic of believing in yourself, following your dreams and sharing joy with others. I’m thrilled to be joining Sony Classical, the label which became home of some of the greatest classical guitarists the world has ever seen. With this exciting new partnership, it is my wish to bring the magical sound of the guitar to more people than ever before and to continue inspiring people around the world.” – Pablo Sáinz-Villegas.