OUT TODAY: LEAD SINGLE FROM ANNETTE A FILM BY LEOS CARAX | MUSIC & ORIGINAL STORY BY SPARKS

OUT TODAY: LEAD SINGLE FROM

A FILM BY LEOS CARAX | MUSIC & ORIGINAL STORY BY SPARKS
LISTEN TO “SO MAY WE START” HERE
WITH VOCALS BY ADAM DRIVER, MARION COTILLARD, SIMON HELBERG AND SPARKS’ RON MAEL & RUSSELL MAEL 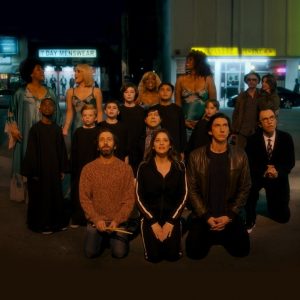 Milan Records today releases the first single from ANNETTE (CANNES EDITION – SELECTIONS FROM THE ORIGINAL MOTION PICTURE SOUNDTRACK), an album of music by legendary art-pop duo SPARKS from the forthcoming musical film – listen to “SO MAY WE START” here. With lyrics by Sparks and Annette director LEOS CARAX, “So May We Start” features vocal performances by Sparks and film leads ADAM DRIVER, MARION COTILLARD and SIMON HELBERG. Set to open the 74th annual Cannes Film Festival, Annette marks the first English-language film from visionary director Leos Carax, with music by Sparks’ Ron and Russell Mael and based on their original story. Annette will be released on Amazon Prime Video Friday, August 20.
With a career spanning over five decades and 25 albums, Sparks is recognized as a groundbreaking pioneer in pop music and contemporary songwriting. Yet another reminder of their everlasting influence and innovation, the story of Annette, originally intended to be a Sparks studio album, was developed with director Leos Carax after a meeting at the Cannes Film Festival in 2013. The final soundtrack collection features lyrics co-written by Sparks and Leos Carax, performed by Sparks and the cast of Annette and produced by Sparks.
Of the collaboration, SPARKS say, “Initially, we conceived Annette as another Sparks album. Yet this time it would be a narrative story that would consist of three main characters, a small enough ensemble that would allow us to also present the ‘opera’ live on tour… The music, story and album were finished and ready to go, which is where the story takes a huge detour. After meeting Leos at Cannes, we felt a real kinship, so we thought we would send him Annette, not expecting anything other than to show him what Sparks was currently up to. And lo and behold, he said he really liked the album and would like to consider it as his next project. We were happily surprised and elated at his reaction. As fans of Leos’ films, to now realize that he would be directing a film of ours was beyond our dreams.”
Annette director LEOS CARAX adds, “I discovered Sparks when I was about 14 – I stole a copy of Propaganda from an underground shop at La Défense because I liked the cover.  Not long after that I saw them live at the Olympia in Paris.  Propaganda and their next album, Indiscreet, have been part of my life ever since. Their tracks are among the most joyous songs I know (although they’re poignant too, in places).  For me, Sparks’ music is like a childhood home, but one free of ghosts. Without them, I don’t think I’d ever have done something I’d dreamt of doing ever since I first started out in cinema: making a ‘film in music.’”

Groundbreaking band Sparks was founded by brothers Ron and Russell Mael in 1969. Recognized across the globe, their career spans 25 distinctive albums and is the perfect lesson in how to stay relevant in the music industry for over half a century. Releasing their eponymous full-length debut in 1972, the Los Angeles natives relocated to London where they released their breakout album Kimono My House, which remains influential today. Setting the tone for what was to follow, Sparks has since created a lasting legacy as a pioneering pop group with their studio albums and live appearances.
Eternal masters of the musical vignette, Sparks has shown no signs of slowing down when it comes to adventures in songwriting.  Echoing the critical and commercial success of 2017’s Hippopotamus, the band’s latest release, 2020’s A Steady Drip, Drip, Drip, became their fourth album to reach the UK Top 10 since 1974, when both Kimono My House and Propaganda reached No. 4 and No. 9 respectively.  In March of 2021, the band revealed they’d begun work on their 26th studio album, planned for a 2022 release to coincide with an upcoming tour.
Now entering their sixth decade, as well as the release of Annette, in 2021 the band’s singular career is explored and celebrated in The Sparks Brothers, the eagerly-anticipated feature-length film by Shaun Of The Dead/Baby Driver director Edgar Wright, which saw its premiere at the Sundance Film Festival and will be released in US cinemas on June 18 before its international release.