U.S. Tour with Thomas Rhett Set to Kick Off on September 22nd in Los Angeles @ the Greek Theatre 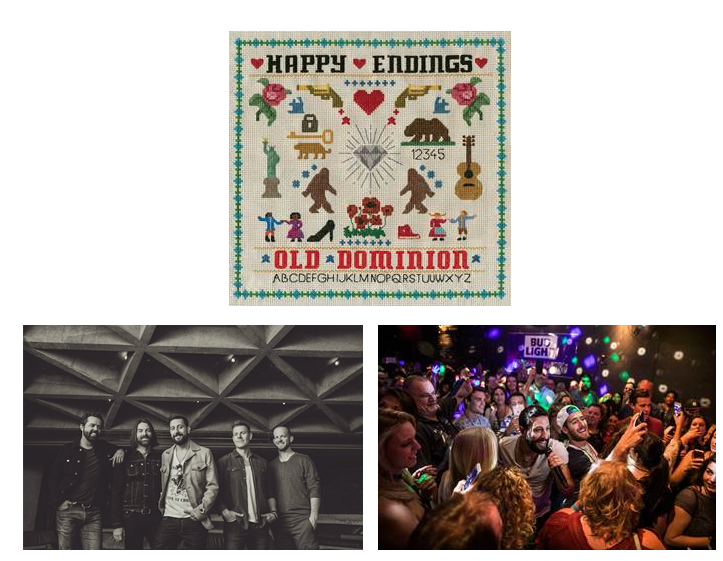 A follow up to their RIAA GOLD-certified debut, Meat and Candy, and produced again by GRAMMY® Award-winning songwriter and producer Shane McAnally, Happy Endings includes tracks “Written in The Sand” and “No Such Thing As a Broken Heart”, which recently hit #12 on Billboard Canada’s consumption chart and peaked at #2 on the Mediabase Canada Country Chart. Old Dominion appeared on Good Morning America last week where they performed their new single. Click HERE to view the performance.

Old Dominion are currently out on the road playing select headlining and festival dates across North America. Most recently, the band performed in front of two sold out crowds at Gillette Stadium opening for Kenny Chesney, and also just wrapped their Bud Light Dive Bar concert series that hit select cities across the US. On September 22nd, Old Dominion will kick off a tour opening up for Thomas Rhett, which will hit cities across the US and UK. While overseas, the band will also perform several concerts for the US Military in Italy and Spain. By the time the band’s tour dates wrap up at the end of 2017, they will have played 110 shows in front of a 1.3 million fans. For more info on tour dates, CLICK HERE and see routing below.

Proving that they are not your average country band, Old Dominion blends old-fashioned country charm, lyrical wit and rock n’ roll grit into radio-friendly, hook-heavy pop nuggets. The band has emerged as one of the hottest breaking bands in country music, fusing clever lyrics and an infectious sound. Old Dominion released their first full length album Meat and Candy, which was certified GOLD by the RIAA and hailed a “stellar debut “by Entertainment Weekly and declared “one of the hottest breaking bands in county music” by Vice. The group already has several top selling singles under their belts, including “Break Up With Him” (PLATINUM), “Snapback” (PLATINUM) and “Song For Another Time,” which hit No. 1 the on the U.S. Billboard Country Airplay and MediaBase charts. In 2016, the band was notably named ACM New Group of the Year, ACCA Breakthrough Group of the Year, AIMP Songwriter Artist of the Year and Music Row Breakthrough Artist of the Year. Old Dominion consists of lead singer Matthew Ramsey, lead guitarist Brad Tursi, multi-instrumentalist Trevor Rosen, bassist Geoff Sprung and drummer Whit Sellers.