Second single “Written In The Sand” now two consecutive weeks at No. 1 on the Mediabase Canada Country Radio Chart 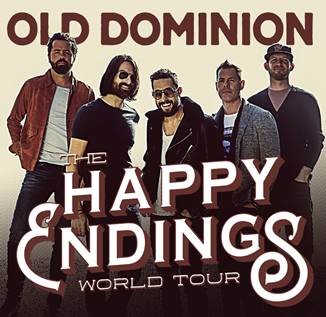 Toronto, ON – February 7, 2018 – Country rockers Old Dominion have taken Canada by storm. After successfully completing and selling out the first five Western-Canadian dates, as part of their headlining Happy Endings World Tour, the band shows no signs of slowing down. This week, the takeover continues as the five-piece expects their upcoming shows in Lethbridge, Kamloops, Abbotsford and Penticton to follow suit.

Fans from the Northwest braced the Canadian winter temperatures and embraced an invigorating live show that was packed full of their favourite tracks, including the smash-hit singles “No Such Thing as a Broken Heart” and “Written In The Sand.” Both of these tracks are featured on Old Dominions sophomore album, Happy Endings, released in 2017 and “Written In The Sand” is currently leading the Mediabase Canada Country Radio Chart at #1 for its second consecutive week. Additional highlights of the night included energetic opening slots by Canadian country bands Cold Creek County and Washboard Union, followed by Old Dominions 90-minute, sing-a-long set. The band seamlessly incorporated the songs “Hotel Key” and “Be With Me,” also off of Happy Endings, as well as some heavy hitters from their debut album Meat and Candy: “Snapback,” “Break Up With Him,” and “Song For Another Time.”

This unparalleled domination of the Canadian market credits itself to the huge success of both of their albums; Happy Endings debuted at #1 on the Nielsen Canadian Country Album Chart as well as #1 on Billboard’s Top Country Albums chart in the U.S., and is a follow up to their RIAA and Music Canada GOLD-certified debut, Meat and Candy. Both albums were produced by GRAMMY Award-winning songwriter and acclaimed producer, Shane McAnally. In Canada, the group has several top selling singles under their belts, including the PLATINUM-selling hits “Break Up With Him” and “Snapback” as well as the GOLD-certified track “Song For Another Time.” “Snapback” was the bands first single to hit #1 on the Canadian Mediabase Country Radio Chart.

Fans will have another chance to see the band perform in Canada in 2018 at the upcoming Calgary Stampede Cowboys Music Festival on July 10 alongside Jon Pardi. For tickets and more information, please visit http://olddominionband.com/tour/

Proving that they are not your average country band, Old Dominion blends old-fashioned country charm, lyrical wit and rock n’ roll grit into radio-friendly, hook-heavy pop nuggets. The band has emerged as one of the hottest breaking bands in country music, fusing clever lyrics and an infectious sound. Old Dominion released their first full length album Meat and Candy, which was certified GOLD by the RIAA and Music Canada. Hailed a “stellar debut “by Entertainment Weekly and declared “one of the hottest breaking bands in county music” by Vice. In 2016, the band was notably named ACM New Group of the Year, ACCA Breakthrough Group of the Year, AIMP Songwriter Artist of the Year and Music Row Breakthrough Artist of the Year. Old Dominion consists of lead singer Matthew Ramsey, lead guitarist Brad Tursi, multi-instrumentalist Trevor Rosen, bassist Geoff Sprung and drummer Whit Sellers.

Cold Creek County’s signature multi-part vocal harmonies are bigger and more upfront nowadays. The feel-good party songs from the band’s 2015 debut, Till The Wheels Come Off, have given way to a warm and more reflective look at the people and places around them for their latest Homemade EP (June 2017). The band has a new singer, with Dalmeny, SK’s (population 1,702) Ches Anthony taking over centre stage duties. Cold Creek County is now a six-piece band with banjoist/vocalist Jordan Honsinger brought on full time after touring with CCC for the past 18 months. Ches and Anthony fit right in with the band that also includes Josh Lester (guitar, vocals), Trevor MacLeod (lead guitar, vocals), Justin Lester (bass, vocals), and Doug Oliver (drums, vocals). Produced and mixed by Scott Cooke (Florida Georgia Line, Nickelback) and Oliver, Homemade showcases a new, more mature side of Cold Creek County pushing the bands vocal harmonies to the forefront.