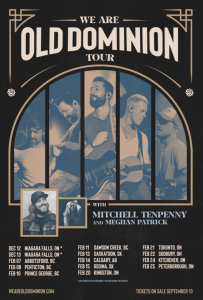 Reveal Two Special Nights in Niagara Falls: “An Evening With Old Dominion, The Band Behind the Curtain” Dec. 12 and 13
Mitchell Tenpenny and Meghan Patrick
Set to Open on “We Are Old Dominion Tour”
Reigning Winners, Old Dominion Nominated a Third Year in a Row for
CMA Vocal Group of the Year

NASHVILLE, TN – Acclaimed CMA Vocal Group of the Year and two-time ACM Group of the Year, Old Dominion announce dates for their “We Are Old Dominion Tour” in Canada kicking off in 2020. The Gold & Gold Productions, AEG, and Concerts West powered outing will hit 12 cities with Mitchell Tenpenny and Meghan Patrick set to open on select dates.

In addition, Old Dominion reveals that on Dec. 12 and 13, they will be doing two special nights in Niagara Falls, ON at the Avalon Ballroom Theatre as “An Evening With Old Dominion, The Band Behind the Curtain.” During these shows fans can expect to see the band showcase a setlist of chart-topping hit songs they’ve penned that have been recorded by other artists, as well as the stories behind the songs.

See 2020 routing below, and click HERE for full routing including previously released dates.

Old Dominion recently announced their self-titled, third studio album set for release on Oct. 25 and released album track “My Heart Is A Bar.” The track was written by band members Matthew Ramsey, Trevor Rosen, and Brad Tursi with Shane McAnally and Josh Osborne. Listen and pre-order Old Dominion HERE.Earlier this summer, the band released two other singles from the new self-titled album. “One Man Band” was released as a fan favorite with more than 70 million streams in the U.S. Click HERE to view their performance of the single on “Good Morning America.” The first single “Make It Sweet” reached No. 1 on Billboard Country Airplay and Mediabase charts, making it Old Dominion’s seventh No. 1 song.

**An Evening with Old Dominion: The Band Behind the Curtain
^^With special guests Mitchell Tenpenny and Meghan Patrick

About AEG Presents
AEG Presents is one of the largest live music companies in the world. The company operates in North America, Europe, and Asia through 16 regional offices that support its tours, which include such artists as Taylor Swift, Paul McCartney, Elton John, The Rolling Stones, Justin Bieber, BTS, Ed Sheeran, Katy Perry, and Kenny Chesney; produce or support more than 25 music festivals, including the iconic Coachella Valley Music & Arts Festival, Stagecoach, the New Orleans Jazz & Heritage Festival, Hangout Festival, Electric Forest, and Firefly; and owns manages, or books more than 80 clubs and theaters.

About Concerts West
Concerts West is an AEG partner based in Los Angeles. Concerts West is one of the world’s largest producers and promoters of live tour and events globally for rock and pop superstars including: Céline Dion, The Rolling Stones, Katy Perry, Roger Waters, and Justin Bieber. 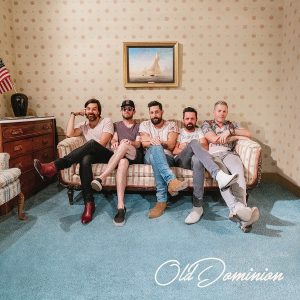