ENDORPHINS OUT NOW VIA BLACK BUTTER

WATCH THE VIDEO FOR “FEEL IT (FT. THEOPHILUS LONDON)” HERE 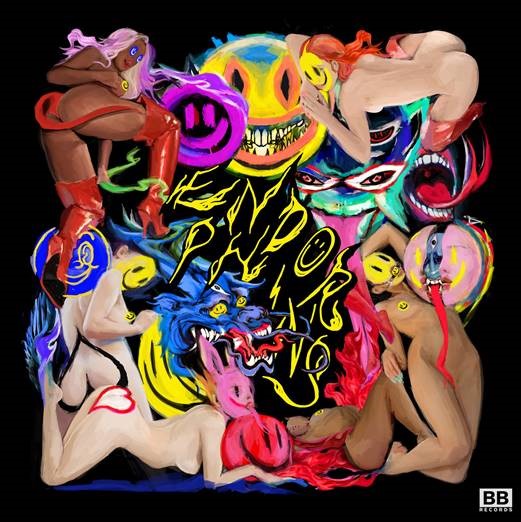 Thursday, June 13th 2019 – London rapper and producer Octavian continues his meteoric rise with the release of a brand new mixtape today. Titled Endorphins, the surprise drop ends months of anticipation and speculation about the next project from an artist who is described by i-D Magazine as “the most original and exciting musician to emerge from London’s genre-defying rap scene” and whose prolific work ethic is matched only by his intense creative energy. The twelve track body of work, recorded between London and Los Angeles, sees Octavian continuing to push boundaries and explore new horizons and sounds. It’s also a further enticing glimpse of what fans can expect from Octavian’s highly anticipated debut album.

To celebrate the release of Endorphins, Octavian today also reveals the video for new single “Feel It (ft. Theophilus London).” Filmed in Los Angeles during the recording of the mixtape, the video is directed by Alex Sossah alongside videographer Gerry Laureus and superbly captures the vibe of the last few months for Octavian. It is available to view HERE.

Endorphins features Octavian’s huge recent crossover anthems “Bet (feat Skepta & Michael Phantom)” and “Lit (feat A$AP Ferg)” alongside ten brand new tracks that feature a host of perfectly curated collaborations. More expansive, diverse and psychedelic than before, the mixtape features the likes of Smokepurpp, Theophilus London, ABRA, JRick, Corbin, Rex Kudo, London On Da Track, PayDay, O12, Elevated, Jessie Ware, Fred Gibbson and more. Among a set of future classics, we also hear Octavian playing guitar for the first time on record, a deft take on SBTRKT’s “Right Thing To Do” (one of Octavian’s favourite tracks as a teenager) on Walking Alone and are introduced to Octavian’s alter ego Rocko Smiles (“more of a rockstar, the dark side of Octavian”). If Octavian’s 2018 run of singles (“100 Degrees,” “Hands,” “Little” and the ever-present cult classic “Party Here”) and his 2018 SPACEMAN mixtape were the perfect encapsulation of UK sounds, Endorphins is the sound of an artist embracing global influences, inspired by his travels around the world.

Endorphins marks the start of the next chapter for Octavian who, over the last eighteen months, has made the transition from highly rated underground UK prospect to one of the most exciting, vital new voices in global music. Starting the year by winning the BBC’s coveted Sound Of 2019 poll, he quickly followed up with a run of brilliant collaborations with the likes of US uber-producers Take A Daytrip (on ”Stressed”) and Diplo (on “New Shapes”). Showcasing his wide-ranging appeal, he’s an artist who can tour with acts as diverse as Christine and the Queens and A$AP Rocky, walk the catwalk for Virgil Abloh’s revitalised Louis Vuitton and, justifiably receive co-signs from Drake and Travis Scott and, most recently, receive further stateside rap world acclaim with a nomination for the 2019 BET Awards.

8th JulyCalvi On The Rocks, Corsica