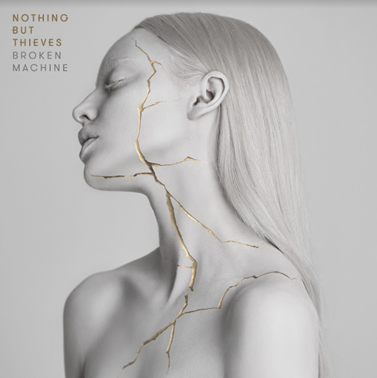 Produced by Mike Crossey (The 1975, Foals, Arctic Monkeys and Twenty One Pilots to name a few) and recorded at Ranch Studios in California, Southend’s Nothing But Thieves are back today to reveal their second album Broken Machine via RCA. Listen now on all DSPs.

The Japanese art of ‘Kintsugi’ is to take something broken and make it more beautiful than before; shards of ceramic put back together with gold-flecked glue, the cracks a proud part of the object. It’s a concept that’s central to Broken Machine, the new album from Nothing But Thieves, whose slow-burning self-titled 2015 debut made them a big deal worldwide– but fractured them too. The album explores the difficulties, strengths and observations the band’s dealt with throughout the time between their debut and now.

First single ‘Amsterdam’ and follow up ‘Sorry’ were instantly A-Listed on Radio 1.  Ahead of album release the band have been playing sold out shows and festivals across Europe as well as a storming live set at Glastonbury Festival.

Nothing But Thieves will be returning for another North American tour in support of Broken Machine including three stops in Canada! For a full list of dates visit https://www.nbthieves.com/

To say Nothing But Thieves have been on an epic journey the past 18 months is an understatement.  Their debut self-titled album has sold over 250k and streamed over 174 Million tracks globally to date.  These five lads from Southend have gone from playing to a handful of friends in Essex to sold out shows across the country, Muse tours, festival headlines in Europe and in the US and even South Korea (where they played to over 20,000 people) all of which have gained them a rabid fan base that follow their every move.  The band spent a big chunk of 2016 in America playing shows and performing on everything from Conan O’Brien, James Corden, to Jimmy Kimmel , their album became the bestselling debut from a UK rock band in the US that year.

It’s safe to say Nothing But Thieves are on the cusp of another hugely successful album and ready to establish themselves as one of the most important bands to emerge from the UK.