NOTHING BUT THIEVES RELEASE NEW SINGLE “FOREVER & EVER MORE” OUT NOW 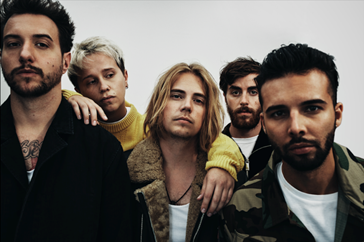 It’s safe to say Nothing But Thieves are a band that don’t like to take a break.  Having toured extensively before and since the release of their latest chart topping album, Broken Machine, the boys finally returned home to play a storming set on the Radio 1 stage at Reading and Leeds festival this past weekend.

Following the stellar performance, the band release a new single entitled “Forever & Ever More,” which is taken from their forthcoming EP What Did You Think When You Made Me This Way? The EP was produced by Jim Abbiss (Artic Monkeys, Kasabian, Adele) and mixed by David Sardy (Catfish & The Bottlemen, Oasis, Noel Gallagher, Royal Blood). The EP will be released via RCA/Sony on October 19. Stream/Download “Forever & Ever More” here: http://smarturl.it/NBT_ForeverEverMore

Their sophomore album, Broken Machine, has streamed over 100 million times on Spotify alone and the five piece from Southend have sold 155k albums to date globally. They are one of the few UK bands to make a mark in the US, playing sell out shows across the country and appearing on everything from Conan O’Brien, Jimmy Kimmel to James Corden, and their debut, self-titled album even became the bestselling debut from a UK rock band in the US in 2015.

The band will embark on a North American tour in September, including the below Canadian dates: