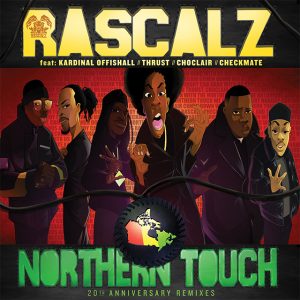 The release includes a digital bundle and vinyl of the following four tracks: A Tribe Called Red remix feat. Black Bear, a remix by DJ Agile and G’Angelo Power, an instrumental version, and the remastered original by Elijah Walsh. The red-coloured vinyl also includes a bonus a cappella version.

Released in 1998 as a single from the Rascalz’s album Cash Crop “Northern Touch” ft. Kardinal Offishall, Thrust, Choclair and Checkmate went on to become one of the most successful hip-hop anthems in Canada. It reached #41 on the Top Singles chart at a time when no other domestic urban song had broken through the Top 100 since 1991.

Shortly after, their single “Northern Touch” gained popularity on Canadian radio and charted at the top of the MuchMusic video countdown. The “Northern Touch” music video was also featured on BET in the U.S. and was later released as a 12-inch single winning the following year’s JUNO Award for Best Rap Recording category. Today, “Northern Touch” stands as one of the most important rap songs in Canadian music history. Earlier this year, Rascalz alongside Checkmate, Kardinal, Choclair and Thrust performed together at the CBC Music Festival, and with Jessie Reyez at the Commodore Ballroom in Vancouver. Watch the performances here: CBC Music Festival & Commodore Ballroom.