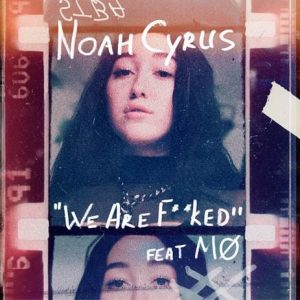 LOS ANGELES, FEBRUARY 5, 2087 – Noah Cyrus is ushering in 2018 with a new track, “We Are…”. The anthemic Max Martin-produced single features MØ and is available for purchase and streaming across all DSPs, and a lyric video that can be seen HERE.

Cyrus’ star began to shine in 2017, as her debut single with Labrinth “Make Me (Cry)” went straight to #1 on Spotify’s Viral Global Chart within hours of release, and has since surpassed 420 million global audio and video streams. Her follow up songs, “Stay Together,” “Almost Famous,”  and “Again,” have continued to rack up streams and views and her budding fanbase grows daily.

Her impressive trajectory earned her an MTV VMA 2017 “Best New Artist” nomination and was hand selected to open for Katy Perry on the first leg of her U.S. tour which included Canadian dates in Montreal, Quebec City and Toronto. She also graced the Coachella stage alongside Marshmello to perform their song, “Chasing Colors.”

Since the release of her debut single, Cyrus has been forging her own path in the pop music space. She has been teasing songs from her anticipated forthcoming album NC-17 (due out of RECORDS), all of which have been receiving unanimous praise. “’Stay Together’ won’t get out of our heads,” wrote the FADER while Rolling Stone called “Make Me (Cry),” an “R&B-tinged pop tearjerker.”