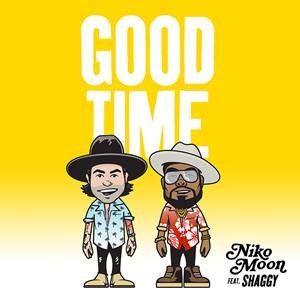 “We worked on this song entirely remotely, which made it a lot of fun. I love Shaggy’s music and his whole vibe,” said Moon. “I found we are both perfectionists when it comes to our work, and we really dialed in to every detail. This is my first collaboration and I had a blast. I loved getting two creative minds together. We’re in completely different genres but both love having a GOOD TIME!”

This new version comes on the heels of Moon’s recent GOOD TIME Campfire Sessions EP that was recorded live in an outdoor setting. “GOOD TIME” has amassed more than 157 million on-demand streams, earning Moon a spot in the RIAA Class of 2020. Taste of Country lauds Moon as “a smooth vocalist with genuine enthusiasm for this boozy chill,” while Country Insider echoes “During a year of much uncertainty, ‘GOOD TIME’ offers radio listeners a feel-good escape.”

Meanwhile Moon continues to build on his reputation as an in-demand songwriter with co-pen credits on Dierks Bentley’s new single “Gone” and “More Surprised Than Me” from Morgan Wallen’s hit album Dangerous.