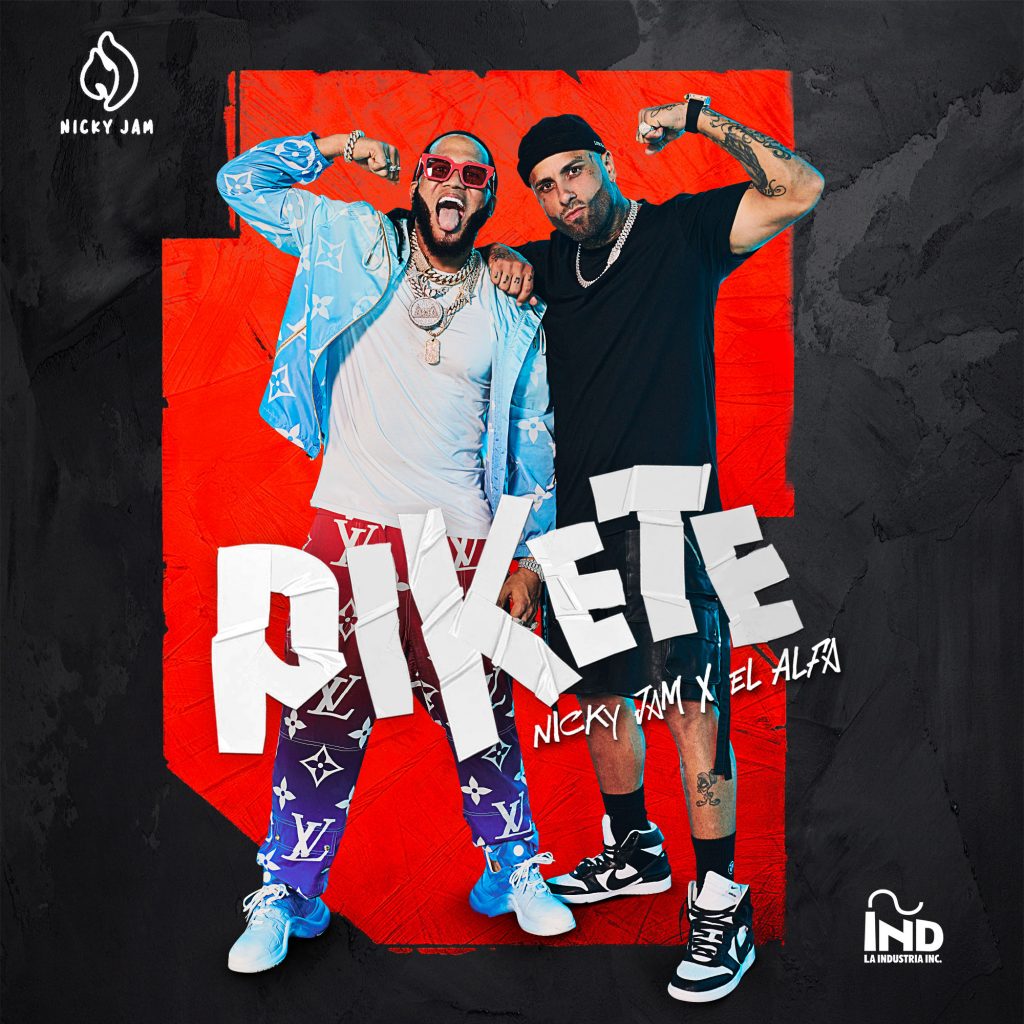 PIKETE AVAILABLE ON ALL DIGITAL PLATFORMS

Toronto, ON – May 27, 2021 – Latin music pioneer, Nicky Jam, releases a new musical collaboration with the “master” of the Dominican dembow, El Alfa. Together, both Latin-music superstars give life to Pikete, a song that promises to become the new summer anthem and is now available on all digital platforms.

Pikete tells the story of a woman who seems unattainable because of her beauty and attitude. The song was born from the composition of its interpreters, Nicky Jam and El Alfa, along with Slow Mike, Luis A O’neill, and Juan Diego Medina Vélez, under the record label, La Industria INC.

The song premieres with its official videoclip, directed by the real pioneer of urban genre music videos, Jessy Terrero, with the production house, Cinema Giants. The lighting, performances, and camera shots will make you think that you are enjoying a cinematographic piece because the idea is to take the fans to an abstract and robotic universe.

The videoclip for Pikete is full of mystery, and the true starring character of the story, the woman who owns the Pikete, will surprise the audience in the final shot.

It is not the first time that Nicky Jam and El Alfa do “magic” in the studio. Songs such as Nadie como tú, Segueta remixand A correr los Lakers have united them at a professional level, however, the last interview that Nicky Jam made with El Alfa, through his own talk show, The Rockstar Show, generated more than 3 million views on YouTube, and their fans asked to see them together, again. Pikete is available on all digital platforms and YouTube.

About Nicky Jam
Nick Rivera Caminero, known as Nicky Jam, is recognized around the world as a pioneer of Latin urban music. At the age of 11, he recorded his first album Diferente a Los Demás (Different From the Rest), which attracted the attention of DJs and artists in Puerto Rico. As a young adult, Nicky Jam quickly rose to the top of his genre with radio hits including Yo No Soy Tu Marido (I’m Not Your Husband), Me Voy Pa’l Party (I’m Leaving for the Party), Fiel A Tu Piel (Faithful to Your Skin) and La Combi Completa (The Complete Package) among others. He toured the world and became one of Latin urban music’s first international stars. He was obligated to stop his music career for three years because of some serious personal problems. In 2013, he relaunched with a new image, coming back stronger than ever.

He notched five radio hits: Piensas en Mí (You Think About Me), Curiosidad, Juegos Prohibidos (Forbidden Games), Voy a Beber (I’m Going to Drink) and the global chart-topper Travesuras (Mischief). In February 2015, Nicky Jam teamed up with Enrique Iglesias to release El Perdón (Forgiveness), his most internationally acclaimed single to date. Tallying over 1 million YouTube views on the day of its release, El Perdón reached 2x Platinum in Canada, and was #1 on Billboard’s Hot Latin Songs chart for 30 weeks (second longest-running single in the chart’s history). In January 2016, Nicky released Hasta el Amanecer (Until Dawn) and went Platinum in Canada, which gave him the biggest Latin song of the year for the second consecutive year. In 2017 Nicky Jam released El Amante (The Lover), and his very first solo album Fénix. The single, El Amante, quickly became an international hit, reaching Platinum in Canada, while the album went 11x Platinum.

His autobiographical series El Ganador (The Winner) premiered on Netflix at the end of 2019, as well as his album, Íntimo, with X (Equis) featuring J Balvin reaching Platinum success in Canada. Nicky Jam returned to the big screen in early 2020 with a role in Bad Boys For Life, starring Will Smith and Martin Lawrence. His most recent single Fan de tus Fotos has generated great impact in the music industry, garnering more than 25 million views within a month of its release.