NICKY JAM,
FRENCH MONTANA AND DZHARO & KHANZA
SEDUCE US IN THREE LANGUAGES WITH LATIN VERSION OF YOU ARE MY HIGH (TY MOY KAYF) 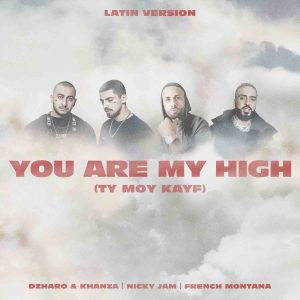 Toronto, ON – April 8, 2021 – The urban-music pioneer, Nicky Jam, is leading the way to globalize one of 2020’s most surprising hits – You Are My High (Ty Moy Kayf). On this official Latin remix, he is joined by Moroccan American hip-hop artist, French Montana, and Russian duo, Dzharo & Khanza, who created the original version. Listen to the single on all digital-music platforms here and watch the video here.

Released in January 2020, the original version of Ty Moy Kayf unexpectedly achieved massive success in Mexico, which then served as the jumping-off point for the song to be embraced by Spanish-speaking countries in South America. Fans of Latin urban music identified deeply with this track’s arrangements and vibe, in spite of its Russian lyrics. In Latin America, it received the informal nickname “Inmortal” due to the word’s similarity to the pronunciation of the song’s title in Russian.

During a year marked by lockdowns and quarantine, this breezy urban-music confection let us travel virtually and dream of the day when we can bring together different cultures in person.

With this Latin Version, Nicky Jam, French Montana and Dzharo & Khanza promote musical unity on a trilingual mix with verses in Spanish, English and Russian. Nicky Jam’s lyrics are brimming with sensuality: “Besándote asi, tocándote asi, solitos tú y yo, una noche de pasión, me muero por ti” (Kissing you this way, touching you this way, just you and I, I die for you.)

Nicky Jam feels proud of the cultural unity promoted by this remix: “This is for the culture! It’s exciting being involved in projects that are so diverse, especially if I’m working with people as talented as French Montana and Dzharo & Khanza. It proves once again that music has no limits and language is not a barrier.”

French Montana, the performer of such global chart-toppers as Unforgettable and No Stylist, sings the second verse in English with lyrics about good times and VIP excursions with his shorty.

French Montana says on the ultimate collaboration: “It feels great to link with Dzharo & Khanza and Nicky Jam (my brothers) on a record with this type of energy and vibe.  This is a global record where the world will hear our individual artistic influences come together as a united sound and culture for the people.”

Ty Moy Kayf (You Are My High) Latin Version is the perfect soundtrack to an international romance or a long dreamed-of trip with a loved one.

Dzharo & Khanza note that they are very grateful for the contributions of their all-star collaborators: “We got really excited when such an opportunity occurred. After the success of an original version of the track in Latin American countries, it seemed a perfect way to bring the Russian and the Latin cultures together. We believe we have very much in common, for example, a really so-called soul-oriented approach to the creative processes. We would like to thank Nicky Jam and French Montana for revitalizing the song with their melodic lyrics and beautiful voices.”

This remix is poised to continue the momentum of the original version, which set a record for most videos uploaded to TikTok, over 2.5 million. In addition, it was named among Shazam’s Top 100 songs of 2020 worldwide, while going Top 10 on the platform in Mexico, Peru, Chile, Colombia, India and Turkey (#1).

Nick Rivera Caminero, known as Nicky Jam, is recognized around the world as a pioneer of Latin urban music. At the age of 11, he recorded his first album Diferente a Los Demás (Different From the Rest), which attracted the attention of DJs and artists in Puerto Rico. As a young adult, Nicky Jam quickly rose to the top of his genre with radio hits including “Yo No Soy Tu Marido” (I’m Not Your Husband), “Me Voy Pa’l Party” (I’m Leaving for the Party), “Fiel A Tu Piel” (Faithful to Your Skin) and “La Combi Completa” (The Complete Package) among others. He toured the world and became one of Latin urban music’s first international stars. He was obligated to stop his music career for three years because of some serious personal problems. In 2013, he relaunched with a new image, coming back stronger than ever. He notched five radio hits: “Piensas en Mí” (You Think About Me), “Curiosidad,” “Juegos Prohibidos” (Forbidden Games), “Voy a Beber” (I’m Going to Drink) and the global chart-topper “Travesuras” (Mischief). In February 2015, Nicky Jam teamed up with Enrique Iglesias to release “El Perdón” (Forgiveness), his most internationally acclaimed single to date. Tallying over 1 million YouTube views on the day of its release, “El Perdón” was #1 on Billboard’s Hot Latin Songs chart for 30 weeks (second longest-running single in the chart’s history). In January 2016, Nicky released “Hasta el Amanecer” (Until Dawn), which gave him the biggest Latin song of the year for the second consecutive year. In 2017 Nicky Jam released “El Amante” (The Lover) and his very first solo album Fénix. The single “El Amante” quickly became an international hit, reaching 7x Platinum, while the album went 11x Platinum. The same year, he made his acting debut in the Vin Diesel blockbuster XXX: Return of Xander Cage. In 2018 he earned three Latin GRAMMY® nominations and appeared on the all-star remix of “Te Boté” (I Dumped You), whose video became the most-watched on YouTube in any genre during 2018. Additionally, Nicky Jam had the honor of recording and performing “Live It Up,” featuring Will Smith and Era Istrefi, for the official soundtrack of the 2018 FIFA World Cup. His autobiographical series El Ganador (The Winner) premiered on Netflix at the end of 2019, as well as his album Íntimo. Nicky Jam returned to the big screen in early 2020 with a role in Bad Boys For Life, starring Will Smith and Martin Lawrence. His most recent single “Fan de tus Fotos” has generated great impact in the music industry, garnering more than 25 million views within a month of its release.

Multi-platinum hip-hop recording artist, producer, and humanitarian French Montana, the man behind the global hit “Unforgettable,” and Global Citizen’s premier rap ambassador, built an indie empire with his Cocaine City imprint. Born Karim Kharbouch in Morocco, he immigrated to the Bronx with his family at the age of 13. Only speaking Arabic and French, he learned English in the streets where hip-hop became a catalyst for him to master the language of his new homeland. He quickly embraced the culture and became enthralled with it, and began releasing the Cocaine City series of DVDs in 2002, mixing interviews with established hip-hop artists and unsigned talent. In 2009, French began releasing mixtapes hosted by DJs like DJ Drama, Evil Empire, and Big Mike. He later signed with both P. Diddy’s Bad Boy and Rick Ross’ Maybach Music, to release his 2012 single, “Pop That,” as the label’s first joint venture. The following year his debut album, Excuse My French charted at number 4 on the Billboard 200. In 2017, French became the official ambassador for Ciroc French Vanilla and released his sophomore studio album, Jungle Rules, which debuted at No. 3 on the Billboard 200, was certified Platinum in the U.S., and became a worldwide phenomenon, going Double Platinum in India and 4x Platinum in the US and Canada, with the 8x Platinum “Unforgettable” as the project’s lead single. “Unforgettable” has surpassed 1.2 billion YouTube views. After shooting the video in Uganda with the Triplet Ghetto Kids and witnessing poverty and hardships, French started advocating for maternal healthcare having ideated the launch of the viral Mama Hope #Unforgettable Global Health Care Campaign that led to the expansion of Suubi “Hope” Health Center which, through the fundraising of $500,000, now provides 300,000 women access to safe childbirthing health care. He further expanded his Pan-African health and education movement into Morocco on the heels of his single “Famous” and became the first rap ambassador of Global Citizen. Recently, he launched the DACA “We Are The Dream” Campaign with educational non-profit Get Schooled and hosted a dinner for undocumented youth at his home which premiered exclusively on Mic.com.

The Russian duo of Orkhan Orujov (Dzharo) and Ishkhan Avakyan (Khanza) fuses pop-house with the aesthetics of Caucasian ethnicity, creating a sound that delights music-lovers around the world. They achieved their first hit in 2018 with “DamaLove.” The fast-growing platform TikTok has been tailor-made for their danceable jams, as millions of users have uploaded videos of their choreography inspired by the duo’s music on hits such as “Queen of the Dance Floor” and “Ty Moy Kayf (Baby You Are My High).” The latter song achieved surprising success in Mexico during 2020, and soon began trending all across Spanish-speaking South America.