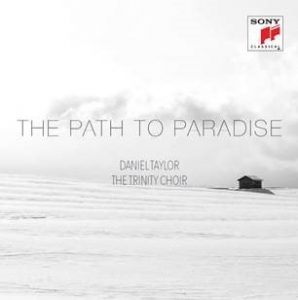 “An atmosphere of spiritual calm pervades a programme embracing a range of simple and rapt choral favourites…Daniel Taylor gets first-rate singing from The Trinity Choir.” Financial Times

“After the brilliant success of his previous album Four Thousand Winter, Canadian countertenor Daniel Taylor returns to offer us a Christmas season with the voices of his superb Trinity Choir… the Trinity Choir brings together the finest flowering of the most beautiful chorister voices…” Montreal Gazette

FOR IMMEDIATE RELEASE Toronto, ON October 25, 2017

Sony Music Entertainment Canada is pleased to announce a new recording from celebrated Canadian Daniel Taylor and the Trinity Choir. A follow up to Taylor’s critically acclaimed Four Thousand Winter, and the Juno- and ADISQ-nominated recording The Tree of Life, The Path to Paradise includes Grigorio Allegri’s popular Miserere plus works by Thomas Tallis, John Sheppard, Orlando di Lassus, Jean Mouton, Arvo Pärt, and William Byrd. It will be released internationally by Sony Classical on Friday, November 24, 2017.

Daniel Taylor and The Trinity Choir record an inspiring journey through more than 1000 years of an a capella landscape, tracing the soul’s lifelong pilgrimage towards a shifting dream of salvation. During these uncertain times Daniel Taylor proposes, with these moving and enlightening accounts, a different vision of paradise. Speaking once again in his unmistakable voice, he leads the full beauty and power of the Trinity Choir through a moving sequence of Easter music from the ancient to modern. Pärt’s devastating Magnificat & Nunc Dimittis balances with impossible delicacy between revelation and melancholy, leading into the startling intimacy of Tallis’ Miserere and Lassus’ fragile In monte Oliveti. The spare beauty of Byrd’s Christe qui lux illuminates the innocence at the core of human striving, followed by Mouton’s Nesciens Mater, which brings the listener from the delicacy of incarnation towards a desperate profession of love. Finally, the timeless and haunting Allegri Miserere reminds us fiercely that “our reach exceeds our grasp”: that the mind is enthralled by what might lie beyond its own boundaries. As Taylor says, “The search for the meaning of spirituality in this life is the foundation – the cornerstone – on which artistic expression is built.”

Recorded in London, England with esteemed producer Nicholas Parker and bathed in the acoustics of Saint Augustine, The Path to Paradise features the Trinity Choir including choristers from across Canada and members of the Tallis Scholars, the Gabrieli Consort and the Monteverdi Choir. These are magnificent interpretations that Daniel Taylor directs with passion and dedication.

Daniel Taylor is one of the most sought-after countertenors in the world and appears on more than 100 recordings across choral, a cappella, operatic and soundtrack repertoire including the Grammy Award-winning recording, Angel Heart. He is an active educator around the globe including master classes at the Beijing Conservatory, the Sao Paolo Conservatory, at the Royal Academy, the Guildhall and the Royal College of Music, as well as classes at leading universities across North America. Daniel Taylor is the Head of Historical Performance at the University of Toronto. As a Conductor, he made his debut with the Tallis Scholars, the Kammerchor Stuttgart and the Gabrieli Consort.

He has recorded several successful recordings for Sony Classical over the past decade, including The Voice of Bach and a recital of Shakespeare Songs. Four Thousand Winter was the critically-acclaimed debut of Daniel Taylor’s professional choir – the Trinity Choir.

Canadian Daniel Taylor returns with a brand new album of stunning music. The Times (London) called him ‘brilliant’ while Gramophone notes ‘beauty of his voice will stop you in your tracks…his vocal beauty bows to no other’. The Globe and Mail writes ‘his star is rising at the speed of sound,’ – ‘Daniel Taylor, a new Conductor on the scene breathing new life into magnificent yet neglected choral masterpieces.’

Joining artistry and scholarship, Daniel Taylor grew up with the pioneering work of John Eliot Gardiner and the Monteverdi Choir (Taylor appears on many discs on the Bach Cantata Pilgrimage) as well as with Harry Christophers and the Sixteen and with Paul McCreesh and his Gabrieli Consort. His 2016-2017 Season includes appearances with Messiah with San Francisco Philharmonia/McGegan, Carmina Burana with the Toronto Symphony/Oundjan, St. Matthew Passion at Vienna’s Musikverein and at St. John’s Smith Square in London, UK as well as engagements with the Cincinnati Symphony, the Calgary Philharmonic and his recital debut in Havana, Cuba. Recently Daniel made his debuts with the New York Philharmonic, the Dallas Symphony, the Cleveland Orchestra, the City of Birmingham Symphony and the Israel Philharmonic.

Daniel is a Visiting Artist at the University of Vienna, Visiting Faculty at the Victoria Conservatory of Music, and on the Faculty of the Summer Academy at the Siena Liberal Arts University in Italy. The University of Toronto recently named Daniel Taylor as Head of Historical Performance and as Professor of Opera and Voice at the Faculty of Music. Daniel is Artistic Director and Conductor of the Choir and Orchestra of the Theatre of Early Music. The Theatre of Early Music performs more than 30 concerts every year in concert halls all over the world. This is Daniel Taylor’s second recording with his new choral ensemble – a gathering of the finest choristers from all over the world – The Trinity Choir.

“If you love choral music, drop what you’re doing and listen to this stunning new Christmas album from the Trinity Choir directed by Daniel Taylor.“ CBC Radio-Canada

“Bathed in the natural reverb of St. Albans the Martyr Church in London, England, the voices of the Trinity Choir (a new group led by Canadian countertenor and conductor Daniel Taylor) sound positively luminous performing choral masterworks by John Tavener, Thomas Tallis, and others. I don’t get to use the word magnificent nearly enough when reviewing albums, but this one certainly warrants it.” Georgia Straight