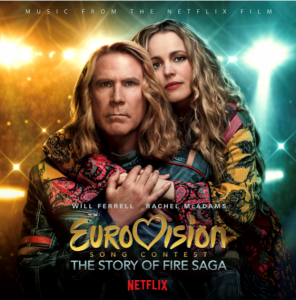 “Composed by a number of talented musicians (including Savan Kotecha, who has written for Ariana Grande and The Weeknd), these impressive ditties nail the bombastic, hummable pop for which Eurovision is famous.”- The New York Times

“There’s a sequence at 46 minutes into the 123-minute Eurovision that stands as one of the most enjoyable cinematic sequences in any film this year. It’s a somewhat stand-alone musical “sing-along,” where our main stars mostly sit back and let a collage of other musicians and actors do a lively and non-competitive version of those “sing-off” scenes from the Pitch Perfect movies.”- Forbes

“Netflix’s hilarious new comedy Eurovision Song Contest: The Story of Fire Saga has brought us our new favorite superstar singing duo: Will Ferrell and Rachel McAdams…From Ferrell’s single “Volcano Man” to “In The Mirror” by Demi Lovato, the soundtrack features some hilariously iconic original songs from the film.”- POPSUGAR

(July 2, 2020 – New York, NY) – The soundtrack for Eurovision Song Contest: The Story of Fire Saga, a Netflix Film directed by David Dobkin (Wedding Crashers) starring Will Ferrell, Rachel McAdams, Dan Stevens, Demi Lovato and Pierce Brosnan is projected to crack 10 million streams in its first week of release. The soundtrack available now via Arista Records reached #1 on the iTunes overall chart in 5 countries including the US, and #1 on the Apple Music soundtracks chart in 24 countries. Breakout track, “Húsavík (My Hometown)” reached  the Top 10 on the iTunes overall chart in over a dozen countries and entered the Spotify Top 200 chart in Sweden, Norway, The UK and Ireland. It’s currently #37 on the US Shazam Chart. In a surprising twist, the film proves extraordinarily prescient, as Fire Saga, the film’s musical group consisting of Lars (Will Ferrell) and Sigrit (Rachel McAdams) hit #1 on the Spotify Top 200 Chart in their hometown of Iceland with their single, “Húsavík (My Hometown)”.

In addition to “Húsavík (My Hometown)” performed by Molly Sandén, the soundtrack includes original songs from the film, featuring Will Ferrell and additional cast members, as well as “In The Mirror” performed by GRAMMY® Award-nominated artist, Demi Lovato and fan favorites “Double Trouble” and “Jaja Ding Dong”. Listen to the soundtrack HERE. Check out the video for the first single off the album, “Volcano Man” HERE. Full tracklisting is below.

Netflix is the world’s leading streaming entertainment service with 183 million paid memberships in over 190 countries enjoying TV series, documentaries and feature films across a wide variety of genres and languages. Members can watch as much as they want, anytime, anywhere, on any internet-connected screen. Members can play, pause and resume watching, all without commercials or commitments.

Founded in 1974 by Clive Davis, and relaunched in 2018 as part of a new broad-based creative partnership between Sony Music and hitmaker David Massey, Arista Records is continuing a legacy of 40 years of iconic recorded music history with a new generation of inspiring artists who are reshaping the music industry. Arista Records is a division of Sony Music Entertainment.