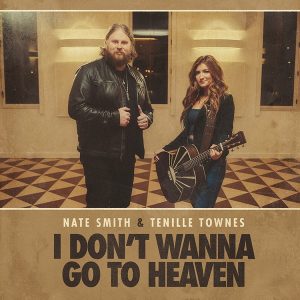 “I’m a huge fan of Tenille, and I kind of just cold emailed her asking if she’d be willing to be part of the song,” Nate said.

“I was such a fan of Nate’s voice and had been hearing the song already and loving it,” Tenille added. “It’s so fun to sing this with him so I’m so glad he reached out.”

Written by Nate and Daniel Fernandez, “I Don’t Wanna Go To Heaven” made waves upon its release, collecting over 2 million total on-demand streams in its first week, contributing to the over 25 million worldwide streams to date. Earlier this year the “Nashville powerhouse” (E! News) teamed up with Nashville’s Echelon Choir to create a special version of the song, which was met with critical acclaim. Watch the video for the choir version here.

Lauded for his “gripping, story-filled songwriting style and emotion-packed vocal chops” (Country Now), Nate was singled out as a 2022 Artist to Watch by Country Now, Country Lifestyle Network and PopWrapped.

About Nate Smith:
Featuring a mix of gritty backwoods soul, rock ‘n’ roll swagger and velvet-thunder vocals, Nate Smith is Sony Music Nashville’s latest signing whose personal journey inspired him to be a beacon of country-music hope, an inspirational mission he puts front-and-center. A California native, former worship leader, and lifelong music lover, Smith approaches that mission with a background as eclectic as it gets. Learning guitar at 13, Garth Brooks, Elvis Presley and Bob Seger were among those informing his powerful, fire-from-within vocals, while Michael Jackson made him crave the spotlight and Nirvana gave his sound a jagged edge. He first chased his neon dreams to Nashville in his early 20s – but it didn’t stick. The disheartened Smith returned home and thought he was “100-percent done” with his artistic journey…until a crucible of change burned away the past.

In 2018, Smith lost everything he owned in the devastating Camp Fire which tore through Paradise, California, now known as the deadliest and most destructive wildfire in the state’s history. Although his family was safe, he struggled to cope and turned back to music, hoping that it would help comfort himself and others. Help it did, inspiring a month-long road trip across the U.S. to Music City, writing music and playing dive bars along the way. Soon after his arrival to Nashville, Nate released his biggest song to date, “Wildfire,” and landed a publishing deal with Sony ATV. Since then, he’s released new music including “Sleeve” and “Under My Skin,” which has amassed over 45 million on-demand streams to date. The singer was named a Spotify Hot Country Artist to Watch for 2021 – an accurate prediction as he rounded out the year with a record deal and two brand new songs: “Raised Up” and the viral TikTok hit “I Don’t Wanna Go To Heaven.” Nate is managed by Kevin “Chief” Zaruk and Simon Tikhman with The Core Entertainment.

About Tenille Townes: Award-winning singer, songwriter and musician Tenille Townes will release her new project Masquerades April 22 via Columbia Nashville/Sony Music Nashville in partnership with RCA Records. A meditation on duality, self-reflection, and embracing flaws, Masquerades follows her acclaimed debut album The Lemonade Stand , which was named Country Album of the Year at the 50th JUNO Awards and Album of the Year at the 2021 Canadian CMA Awards, where Townes also earned her third consecutive Female Vocalist of the Year trophy. The two-time ACM Award-winner is also the first female artist in Mediabase Canada history to achieve two No. 1 singles (Music Canada Gold-certified “Jersey On The Wall (I’m Just Asking),” Music Canada Platinum-certified and RIAA Gold-certified “Somebody’s Daughter”). Following standout support runs with Dierks Bentley, Miranda Lambert, Brothers Osborne, George Strait and Reba, Townes recently wrapped her first headlining U.S. trek, the VILLAIN IN ME TOUR, and will open for Brooks & Dunn on select dates before embarking on her own headline European tour. A Forbes 30 Under 30 honoree, Townes has been featured by NPR, Variety, Refinery29, Billboard, Rolling Stone, NBC’s “TODAY,” BBC and more. Additionally, she has raised over $2 million for Big Hearts For Big Kids, a non-profit she started when she was 12 years old to benefit a youth shelter in her hometown, which has grown to support organizations such as Girl Scouts of Middle Tennessee.