NATE SMITH DEBUTS “WHISKEY ON YOU” MUSIC VIDEO WITH CMT 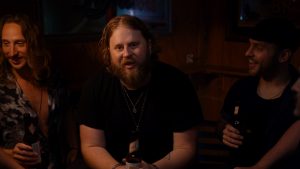 NASHVILLE, Tenn. – Breakout artist Nate Smith debuted the music video for his explosive new single, “Whiskey On You,” today. The video made its broadcast premiere on CMT Music and CMT.com. Watch here.

Directed by Chris Ashlee, the hilarious video stars Smith along with TikTok creator Katie “Demps” Dempsey, who plays the singer’s crazy ex-girlfriend. The video has a 90s VHS type feel and follows the breakup between the two during Smith’s band’s practice. The garage band turned Nashville superstars then take the stage at a jam-packed Whiskey Jam in Loser’s parking lot, featuring real footage from Smith’s performance last month.

“I am thrilled for the ‘Whiskey On You’ music video to come out!!” Smith said. “I really wanted everyone to get to know my fun side. I couldn’t have had a better costar than Demps! She absolutely crushed it and will definitely make you laugh!”

Lauded as the “breakup song of the summer” by Country Now and “an enormously satisfying country kiss-off anthem” by Stereogum, “Whiskey On You” amassed over 7.5 million total global on-demand streams in its first week, reaching No. 10 on the Country On-Demand Streaming Chart. The track also debuted at No. 84 on the Billboard Hot 100 and No. 14 on the Hot Country Songs chart, marking Smith’s first career entry on the chart. He also re-entered Billboard’s Emerging Artists chart at No. 1, becoming the top emerging act in the U.S. for the first time. “Whiskey On You” has amassed over 50 million total on-demand streams to date and is currently climbing the country radio charts.

Following his headlining WHISKEY ON YOU TOUR, Smith will kick off his opening stint on Brett Eldredge’s Songs About You Tour this weekend. For dates and tickets, visit NateSmithOfficial.com.

About Nate Smith:
Featuring a mix of gritty backwoods soul, rock ‘n’ roll swagger and velvet-thunder vocals, Nate Smith is Sony Music Nashville’s latest signing whose personal journey inspired him to be a beacon of country-music hope, an inspirational mission he puts front-and-center. A California native, former worship leader, and lifelong music lover, Smith approaches that mission with a background as eclectic as it gets. Learning guitar at 13, Garth Brooks, Elvis Presley and Bob Seger were among those informing his powerful, fire-from-within vocals, while Michael Jackson made him crave the spotlight and Nirvana gave his sound a jagged edge. He first chased his neon dreams to Nashville in his early 20s – but it didn’t stick. The disheartened Smith returned home and thought he was “100-percent done” with his artistic journey…until a crucible of change burned away the past.

In 2018, Smith lost everything he owned in the devastating Camp Fire which tore through Paradise, California, now known as the deadliest and most destructive wildfire in the state’s history. Although his family was safe, he struggled to cope and turned back to music, hoping that it would help comfort himself and others. Help it did, inspiring a month-long road trip across the U.S. to Music City, writing music and playing dive bars along the way. Soon after his arrival to Nashville, Nate released his biggest song to date, “Wildfire,” and landed a publishing deal with Sony ATV. Since then, he’s released new music including “Sleeve” and “Under My Skin,” which has amassed over 60 million on-demand streams to date. The singer was named a Spotify Hot Country Artist to Watch for 2021 – an accurate prediction as he rounded out the year with a record deal and two brand new songs: “Raised Up” and the viral TikTok hit “I Don’t Wanna Go To Heaven.” The powerhouse vocalist is now making waves with his latest release, “Whiskey On You,” which is currently climbing the country radio charts. Nate is managed by Kevin “Chief” Zaruk and Simon Tikhman with The Core Entertainment.