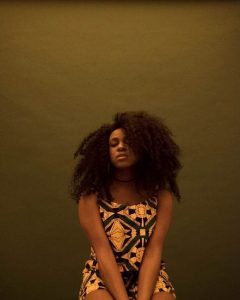 “Nostalgia” is both prime NAO and another leap forward for this ridiculously talented Londoner. Still recognisably her self-described “wonky-funk”, it’s a richer sounding record, fully animated and fluid, making it another landmark recording in NAO’s short career. The track has been written as the centrepiece of a new documentary by Vice entitled “Science Of Sound”, where NAO and Vice look at how music has the power to evoke memories and create emotions. We hear Nao discuss her first memories around music with family and friends and sees her return to Walthamstow Town Hall where she first began singing in competitions as a teenager. The film has been produced with Ford to launch the All-New Fiesta.

The last three years has seen NAO’s talents bloom. Her first release “So Good” came in 2014, and was the first indicator that here was a new and unique talent. From there Best New Music accolades came from Pitchfork for the tracks “Apple Cherry” and Inhale Exhale”, whilst she was featured in NME, The Guardian, Q and Elle. Her debut album “For All We Know” was a landmark record, her self-described “wonky-funk” fleshed out over 18 stunning tracks that drew critical acclaim from all quarters. Recognition came thick and fast with a nomination for Best Newcomer at 2015’s MOBO Awards and this year NAO was nominated for Best British Solo Artist at the Brit Awards.

More recently NAO has performed at Coachella, both her own amazing set and alongside Bon Iver and Mura Masa. She was also the undoubted highlight at Afropunk in London.