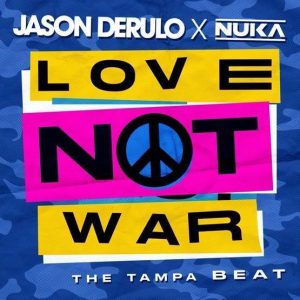 With a staggering 40 million followers across TikTok, Derulo is the biggest musician across the platform. The undeniably catchy yet enigmatic instrumental from 19-year-old New Caledonian producer Nuka captured the attention of many and amassed over 200 billion impressions worldwide. Derulo being a big fan of the viral sensation, sifted through the videos and across the internet sought after the creator. Regardless of the miles that separated the two artists, the power of music brought the two artists together to create new hit Love Not War (The Tampa Beat).

Listen to Love Not War (The Tampa Beat) here

Watch to Love Not War (The Tampa Beat) here

A true multi-platform powerhouse, Jason Derulo undoubtedly ranks among the top pop and urban artists of this or any era, with 5 #1 OCC singles, with 11 RIAA platinum certified singles, 15 billion combined global streams, close to 7 billion YouTube views, and worldwide singles sales well in excess of 190 million. The wildly talented singer, songwriter, dancer, and entertainer first drew acclaim through songwriting collaborations with such like-minded icons as Lil Wayne, Pitbull, Diddy, and Sean Kingston. Derulo kicked off his remarkable solo career with 2009’s chart-topping, 5x platinum certified “Whatcha Say” and never looked back, rolling out five acclaimed albums and an epic string of hugely successful hit single including “In My Head,” “Ridin’ Solo,” “Talk Dirty (Feat. 2 Chainz),” and “Want You To Want Me,” all of which received 4x platinum certification from the RIAA. Additional platinum and multi-platinum hits include the 3x platinum “Wiggle (Feat. Snoop Dogg),” the 2x platinum “Swalla (Feat. Nicki Minaj & Ty Dolla $ign)” and “Trumpets,” and the platinum certified “Don’t Wanna Go Home,” “It Girl,” “The Other Side,” and “Marry Me.” As if all that weren’t enough, Derulo has been an in-demand featured artist, creating international hits with such diverse stars as Pitbull, Florida Georgia Line, Little Mix, Flo Rida, Gucci Mane, and Sofía Reyes.

Among his countless career accomplishments, Derulo is among social media’s biggest stars of any genre, currently boasting over 113 million fans and followers across all platforms.

New Caledonian 19-year-old producer Nuka unassuming uploaded a beat he called 4 Brylean (WayzRmx2018) to his SoundCloud page in 2018, alongside many other Siren inspired remakes and production edits he had shared.

Two years later the audio had been catapulted into the limelight across the online universe of Tik Tok. In the midst of lockdown and a global pandemic, Tik Tokers around the world had gravitated towards the uplifting, hypnotic sounds of Siren music. Whilst, Jawsh685 had taken the genre mainstream with his single “Savage Love”, NUKA’s instrumental remained at the helm of the growth of the genre across Tik Tok. However, now being called the Tampa Curhat Beat – named after the initial Tik Tok uploader – the audio had been condensed into 10 seconds and paired a catchy dance to match. Undeniably one of the most used sounds on audio, NUKA’s instrumental became the soundtrack to over 23 million Tik Tok videos, boasting to over 200 billion impressions. For comparison more videos and impressions than Powfu’s – DeathBed, Regard’s – Ride it & Sam Fisher’s – This City combined! While the song seemed to have reached all the ends of the earth, with various remakes of the track, claims to creation and even a new title, NUKA was none the wiser.