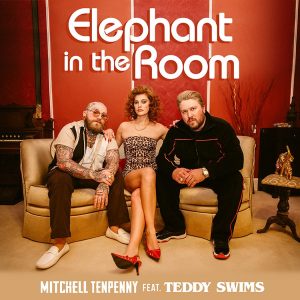 TORONTO, ON.  – Riser House/Columbia Nashville/Sony Music Nashville’s Mitchell Tenpenny is a star steadily on the rise as he continues to build his fan base by writing, recording, and releasing new music. Those fans have responded by soaring his on-demand streams to 1.2 Billion, increasing his spins at country radio, and flocking to his shows on tour. Today, Mitchell debuts a new song and music video with “Elephant in the Room” feat. Teddy Swims, celebrates the ongoing success of current radio single “Truth About You,” and adds two Luke Combs tour dates to his schedule this fall.

“So many exciting things are happening in my life this year,” shared Mitchell. “I continue to be blown away by the engagement of my fans with all the new music we release, requesting the single at radio and coming out to see us play live.”

On today’s “Elephant in the Room” song release Mitchell added, “I connected with Teddy a few years ago over DMs on Instagram to tell him how refreshing it was to hear a voice like his. When we met, we became instant friends and began writing together. ‘Elephant in the Room’ is about that enate thing in us as humans when we can feel it when someone is watching us. This song is a love story about two people who have this kind of chemistry and energy happening from across the room. And everyone else can feel it too because it’s so powerful. I hope the fans will enjoy the music video for the song; it’s just insanely fun.” Swims, who hails from Atlanta and whose last name is an acronym for “Someone Who Isn’t Me Sometimes,” has a social following of millions based on the strength of his original material and unexpected cover songs. Get the song HERE and watch the video directed by Stephen Kinigopoulos and Alexa Stone (Running Bear Films) HERE.

When Mitchell debuted his current radio single “Truth About You” for his fans on TikTok it instantly became the highest streaming debut of his career, and that fan demand sent the song to radio. In the last three months “Truth About You” has jumped more than 20 spots on the radio charts and has now garnered over 95 million on-demand streams. Additionally, his chart success has continued with the hit he co-wrote and performed with Chris Young, “At The End Of A Bar,” which is currently in the Top 25. They performed the song for television audiences on the Today Show, The Kelly Clarkson Show and the 57th Annual ACM Awards.

Mitchell ended 2021 as one of his most successful touring years. 2022 is shaping up to be even better with the success of his own headline “2 Us It Did Tour,” Luke’s Bryan’s upcoming “Raised Up Right Tour” and today’s announcement he will play two dates with Luke Combs on his “Middle of Somewhere Tour – Fall 2022” on September 2 & 3 in Bangor, Maine at the Maine Savings Amphitheater.

Mitchell Tenpenny is a multi-faceted entertainer: singer, songwriter, producer and performer. Since the release of his debut single, “Drunk Me,” Mitchell has set new standards for breakout success in country music. The 2X Platinum-certified, No. 1 hit that has amassed over 550 million on-demand streams was taken from his introductory album, Telling All My Secrets, and earned him the best first week showing for any major label country debut LP at the time of its release. Since that time, the “winning” singer (the New York Times) has received nominations from the Academy of Country Music and the CMT Awards.

Mitchell consistently rolled out new music for his fans during 2020 and 2021 with two Christmas projects, Midtown Dairies EP, a new version of his song “Bucket List” featuring Christian artist Danny Gokey, and the recent release of The Low Light Sessions EP.

Mitchell’s career on-demand streams are among the best out of today’s breakout artists, with over 1.2 billion total and as many as six tracks exceeding competitive artists’ tracks thanks to his loyal fan base. At the close of 2021, Mitchell was a Top 10 artist on Spotify’s Hot Country (#7) and the #5 most-played artist on SiriusXM’s The Highway only just behind superstars like Kane Brown, Luke Combs, Thomas Rhett, and Chris Stapleton. His social following continues to grow and specifically, his TikTok following, and likes are competitive with current headlining acts.