Reigning ACM Entertainer of the Year Profiled on “CBS Sunday Morning” This Sunday, May 1 at 9 a.m. ET / 8 a.m. CT 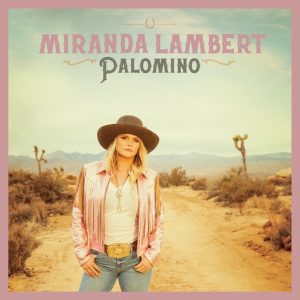 Already lauded as one of the year’s most anticipated albums prior to arrival by Vulture and USA Today, the project lyrically visits 30+ locations with countless characters along the way, as the expansive 15-song project takes listeners on a freewheeling trek from the Mojave Desert to Battambang, Cambodia and everywhere in between. Lambert serves as a co-writer on 14 of the 15 songs, with the only outside cut arriving via a rousing cover of Mick Jagger’s “Wandering Spirit.”

Variety observes that “her voice is impeccable” on “yet another rock-solid entry in one of the 21st century’s most ruthlessly consistent discographies” while Rolling Stone celebrates her as “country music’s most ambitious artist” and Yahoo Entertainment remarks, “this trailblazer once again confounds expectations and pushes musical boundaries.”

The L.A. Times agrees, noting, “Lambert’s catalog might be the most consistent of any current country star’s. But nobody has taken more chances with her sound than she has.” NPR adds that “where so many country artists are still, somehow, stuck on back roads, Lambert is speeding down the interstate” as Paste posits that her songwriting is “unparalleled in country music—and beyond.”

Pitchfork also praises the “scattershot travelogue that houses some of her best-ever songwriting” for “demonstrating the tensile strength of Lambert’s craft in all sorts of settings,” while Esquire declares that Palomino is “a stunning summary of all her strengths and styles, eclectic and cohesive and yet another step forward in a career that has stood, from day one, for creative evolution and growth” and Billboard adds, “Palomino finds Lambert at the top of her game, both synthesizing the classic tropes of country music while modernizing its sound and taking risks.”

“Palomino came together during a time when the gypsy-spirit side of me couldn’t wander,” shares the reigning ACM Entertainer of the Year. “The characters along the way, the stories and these places ended up inspiring me in ways I’ve not experienced before. I hope they spark that in you, too.”

The journey to Palomino will be highlighted this Sunday, May 1, at 9 a.m. ET / 8 a.m. CT as the first female entertainer to have a presence on Broadway visits her own Casa Rosa bar and restaurant with “CBS Sunday Morning” reporter Lee Cowan to offer an in-depth look at the new album’s inspirations and her numerous career accomplishments thus far.

That storied career nearly two decades in the making was on full display at her Nashville concert last night, where the Tennessean extolled her as “court[ing] legendary status,” noting, “At some point in a top artist’s career, their work exceeds the space of being treated as one of many great songs. Instead, their hits are elevated to being generation-defining artistic works. This moment happened on April 28 for Miranda Lambert.”

The evening also included a surprise pre-show presentation where Lambert was presented with a career-spanning plaque (photo below) honoring her abundant achievements thus far. In addition to recognizing her more than 5 billion on demand streams and over 9 million albums sold, the plaque also recognized 10 brand new RIAA certifications bringing the total Gold, Platinum and multi-Platinum certifications to more than 37,500,000 combined copies of her Vanner Records/RCA Nashville catalog.

Lambert will take that hugely successful catalog hits on the road along with the new music from Palomino this spring as her co-headlining The Bandwagon Tour with Little Big Town kicks off in her home state of Texas next Friday, May 6, before traveling to Las Vegas for her recently announced Velvet Rodeo residency at Planet Hollywood Resort & Casino’s Zappos Theater this September, with dates scheduled through April 2023.

For more information on all upcoming dates and new music, visit www.MirandaLambert.com and follow on social media @MirandaLambert.

Available everywhere now, Palomino, the eighth solo album from Vanner Records/RCA Nashville superstar Miranda Lambert, is the latest installment in a storied career that has spanned seven consecutive No. 1 solo albums, 10 No. 1 hit radio singles, more than 70 prestigious awards and countless sales certifications, earning the reigning ACM Entertainer of the Year praise from NPR as “the most riveting country star of her generation.”

Following 2019’s critically acclaimed release of her GRAMMY Award-winning album, Wildcard, the Texas native ushered in her next musical era with the recent release of Palomino lead single “If I Was a Cowboy” (currently climbing the Top 20 at Country radio), while also adding her voice to Netflix’s new season of Queer Eye with inclusive anthem “Y’all Means All.” She is set to hit the road on The Bandwagon Tour with Little Big Town this spring and will kick off her Velvet Rodeo Las Vegas residency at the Zappos Theater at the Planet Hollywood Resort & Casino in September.

In addition to Wildcard, the celebrated singer/songwriter’s lauded discography includes The Weight of These Wings (2016), Platinum (2014), Four The Record (2011), Revolution (2009), Crazy Ex-Girlfriend (2007) and Kerosene (2005). She has also released three albums with her trio, the Pistol Annies, as well as 2021’s The Marfa Tapes, a critically acclaimed and GRAMMY-nominated, raw and intimate recording with collaborators Jack Ingram and Jon Randall.

The most decorated artist in the history of the Academy of Country Music, Lambert has earned 37 ACM Awards (including the current ACM Entertainer of the Year title and a record-setting nine consecutive Female Artist of the Year Awards), 14 CMA Awards, three GRAMMY Awards, the Nashville Symphony Harmony Award, ACM Gene Weed Milestone Award and ACM Song of the Decade Award, plus was named 2019’s RIAA Artist of the Year. She is the youngest artist ever to serve as the Country Music Hall of Fame & Museum’s Artist in Residence, joining a legendary list of predecessors including Kris Kristofferson, Guy Clark, Tom T. Hall, Jerry Douglas and more.

Her clothing and cowboy boot collection, Idyllwind, is a private-label brand sold at all Boot Barn stores nationwide. For more information, visit www.idyllwind.com.

Lambert’s MuttNation Foundation, a 501c3 nonprofit has raised over $6 million since its inception in 2009. The Foundation’s mission is to promote the adoption of rescue pets, support animal shelters across the country, advance spay & neuter and assist with the transport of animals during times of natural disaster. For more information, visit www.muttnation.com.