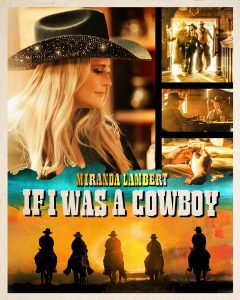 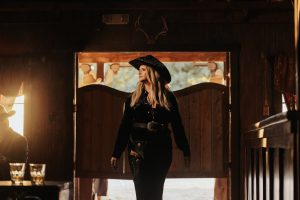 TORONTO, ON. – Undisputed queen of country Miranda Lambert saddles up in her cinematic new “If I Was A Cowboy” music video. Watch here.

“This song has references to all of my favorite westerns, and a cowboy lifestyle,” said Lambert of the Trey Fanjoy-directed visual. “We shot this video in a little old west town in Texas with real cowboys!”

“If I Was A Cowboy” – currently Top 25 and climbing at radio – is the first sneak peek at Lambert’s next musical chapter and “shows off Lambert’s versatility as an artist,” (American Songwriter) with a “relaxed, organic vibe” (Billboard).

In addition to new solo music on the horizon, The Marfa Tapes – Lambert’s stripped-back collaboration with Jack Ingram and Jon Randall – continues to earn acclaim as it was named one of the year’s best albums by TIME, Vulture, Esquire, Billboard, Rolling Stone, Boston Globe, Dallas Observer, The Tennessean, and more. The accompanying documentary “The Marfa Tapes,” an intimate behind-the-scenes look at the recording of the GRAMMY Award-nominated project, will debut on Paramount+ Jan. 20.

Meanwhile, Lambert is set to join Little Big Town for another round of their acclaimed co-headlining outing, The Bandwagon Tour, a reincarnation of their 2018 run of the same name that earned rave reviews from Pollstar, CMT, The Tennessean, and more. Tickets for The Bandwagon Tour are on-sale Friday (1/14) at 10:00 a.m. local time*. She’s also set for solo headline shows at the Tuscaloosa Amphitheater in Tuscaloosa, AL (4/27) and FirstBank Amphitheater in Franklin, TN (4/28).

About Miranda Lambert: Vanner Records/RCA Nashville superstar Miranda Lambert has been the face of modern country music for over a decade thanks to her distinct artistry, singular discography, and unwavering courage to blaze her own trail.

With a trophy case full of prestigious honors, including three GRAMMY Awards, Lambert is the most decorated artist in the history of the Academy of Country Music earning 35 ACM Awards (including a record-setting nine consecutive Female Vocalist of the Year titles). She has also won 14 CMA Awards, the Nashville Symphony Harmony Award, ACM Gene Weed Milestone Award and ACM Song of the Decade Award. She was recognized as the 2019 RIAA Artist of the Year, was the youngest artist ever to serve as the Country Music Hall of Fame & Museum’s Artist in Residence, joining a legendary list of predecessors, and was inducted into the National Cowgirl Hall of Fame in October 2021.

The native Texan has been hailed as “the most riveting country star of her generation” (NPR), having earned multi-Platinum sales across a storied career that spans seven No. 1 solo albums. The most recent, GRAMMY-winning tour-de-force Wildcard, produced her seventh No. 1 smash, “Bluebird,” as well as GRAMMY nominated single “It All comes Out in the Wash” and Top 5 “Settling Down.” Expanding her creative genius even further, Lambert joined forces with Jack Ingram and Jon Randall for their GRAMMY nominated album The Marfa Tapes, a raw, one-of-a-kind project full of unvarnished one-take recordings. She has also released four critically acclaimed albums with “musical force of nature” (Entertainment Weekly ) Pistol Annies, her trio with Angaleena Presley and Ashley Monroe.

2022 sees a new musical era for the ever-evolving Lambert, ushered by her latest single “If I Was A Cowboy.”