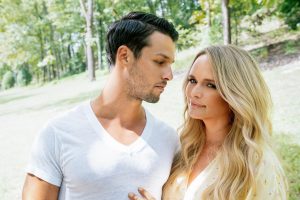 “The ‘Settling Down’ video is very personal to me because it was filmed at my farm and my husband got to be in the video with me,” said Lambert. “My mom always called me a wild child and a homing pigeon. I always have an itch to find a new adventure, but I’m also always ready to walk through my front door. I feel like a lot of people feel that way, and ‘Settling Down’ tells the story of being caught between those two feelings.”

Directed by Trey Fanjoy, the sprawling visual follows Lambert and her husband, Brendan McLoughlin, at home in Tennessee. Lambert’s horse, Gibson, as well as one of her many rescue dogs, Delta Dawn, also have cameos.

“Settling Down” is the most recent single from Lambert’s universally acclaimed album Wildcard and follows her No. 1 hit “Bluebird.” “Bluebird” is currently nominated for Single, Song, and Music Video of the Year at “The 54th Annual CMA Awards” where Lambert is also up for Entertainer, Female Vocalist, Musical Event (“Fooled Around and Fell in Love” with Maren Morris, Elle King, Ashley McBryde, Tenille Townes and Caylee Hammack), and Album of the Year (Wildcard). These new crop of nominations made Lambert the most-nominated female artist in CMA history, with 55 career nods.

The most decorated artist in the history of the Academy of Country Music, Lambert has earned 35 ACM Awards (including a record-setting 9 consecutive Female Vocalist of the Year Awards), 13 CMA Awards (Country Music Association), 2 GRAMMY Awards, the Nashville Symphony Harmony Award, ACM Gene Weed Milestone Award, ACM Song of the Decade Award, and was named 2019 RIAA’s Artist of the Year. She is the youngest artist ever to serve as the Country Music Hall of Fame & Museum’s Artist in Residence, joining a legendary list of predecessors including Kris Kristofferson, Guy Clark, Tom T. Hall, Jerry Douglas, Cowboy Jack Clement, Earl Scruggs, Connie Smith, Roseanne Cash, and more.

The celebrated singer/songwriter released her seventh studio album, Wildcard, in 2019, which was declared one of the year’s best albums by GQ, Variety, Billboard, Rolling Stone, Slate, and many more. Wildcard features GRAMMY Award-nominated single “It All Comes Out in the Wash,” plus her No. 1 smash hit “Bluebird” and “Settling Down.” Lambert’s seventh consecutive No. 1 album, Wildcard joins her lauded discography that includes The Weight of These Wings (2016), Platinum (2014), Four The Record (2011), Revolution (2009), Crazy Ex-Girlfriend (2007) and Kerosene (2005). In addition, she released three albums with her trio, the Pistol Annies.

Miranda’s MuttNation Foundation, a 501c3 nonprofit, is celebrating its 10th Anniversary. Since its inception in 2009, MuttNation has raised over $4.4 million in support of its mission to promote the adoption of rescue pets, support animal shelters across the country, advance spay & neuter, and assist with the transport of animals during times of natural disaster. www.muttnation.com