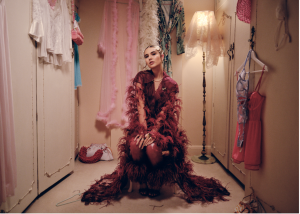 Directed by Pip + Lib, the clip begins with Mimi in her bedroom surrounded by her girlfriends. Soon, the post-breakup sorrow turns into ebullient energy. She tries on various outfits and undergoes a rejuvenating glam routine only to emerge more confident than ever alongside of her girl gang. The visual brings the lyrics to life as the chorus rings out, “I’m so good without.”

Of the video, Mimi commented, “It’s very girl power. You’re trying to get over it and move on, but you need your friends. It isn’t all heartbreak. We gave it a twist. If you’re in the middle of a breakup, no matter the stage, I want you to be able to relate. When your girls are behind you, you’re going to be alright.”

To date, Good Without has already amassed over 17.1 million Spotify streams and received critical acclaim. Refinery29 championed it among New Music To Know and praised its “almost hymnal quality.” Reacting across popular culture, Casimere Jollete—star of the NETFLIX hit, Tiny Pretty Things—posted a stunning dance video on Instagram.

Upon arrival, Good Without bowed in the Top 20 in the UK and continues to chart all over Europe as a fast-rising breakout hit with placements on playlists such as Today’s Top Hits, Hot Hits UK, Hot Hits NL, and It’s Hits in Sweden, Norway, and Denmark. It debuted Top 40 Norway, Top 20 Spotify UK, Top 25 Ireland, Top 30 Norway, and Top 50 Denmark. In Ireland, it also emerges in the Top 10 at Shazaam. Meanwhile, she sold out her two UK shows in minutes!

Right now, she’s preparing her debut EP for release soon. 2021 is getting good with Mimi Webb.

About Mimi Webb
Mimi Webb projects a voice as magnetic, massive, and magical as her personality. As “the girl next door” with a hell of vocal range, she’s quick to laugh, will let you know precisely what’s on her mind, and isn’t afraid to be heard. Originally hailing from the UK town of Canterbury, the pop singer and songwriter turns up the volume on every emotion with skyscraping runs and open-heart honesty.  Inspired by the likes of Amy Winehouse, Emelie Sandé, and Sam Smith, she started writing songs of her own at 13-years-old in diaries before eventually learning guitar. Around the same time, she enrolled in The BRIT School—known for alumni such as Adele, Amy Winehouse, Jessie J, and more. Three years later, she left home, moved in with a host family, and attended the prestigious BIMM [British Institute of Modern Music]. In 2019, she uploaded a handful of early compositions and collaborations online, landed management, and inked a deal with Epic Records. During a New York City dinner with friend Charli D’Amelio just before Christmas, Mimi’s impromptu acapella (in the restaurant) exploded with nearly 20 million views, paving the way for a string of original fan favorites such as Before I Go, I’ll Break My Heart Again, Reasons, and Good Without. After amassing over 100 million streams and hundreds of millions of views and receiving widespread acclaim from Wonderland, FLAUNT, and American Songwriter, she shines on her 2021 debut EP for Epic Records and much more music to come. 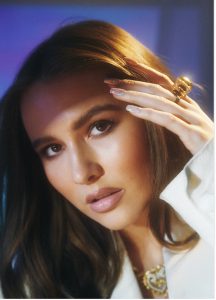